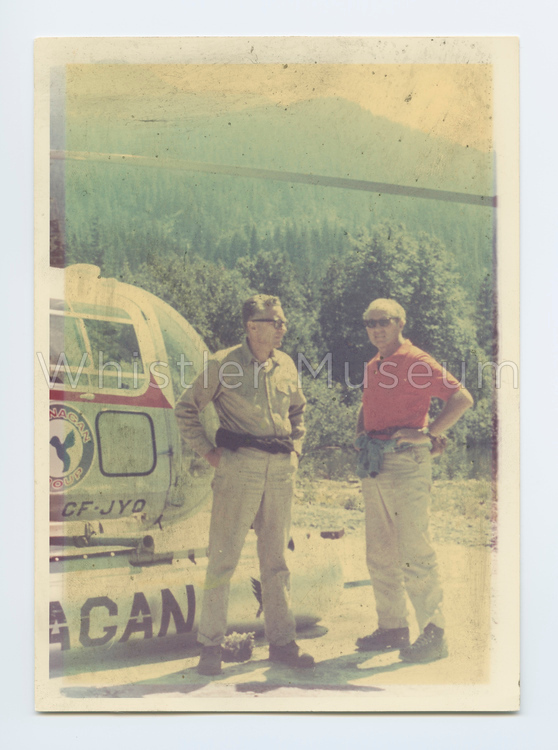 For almost any skier, heli-skiing is the ultimate dream.

And up until the early 1960s that’s essentially all it was, until renowned Austrian-Canadian mountain guide Hans Gmoser famously invented the new sport. It began with some experimental reconnaissance flights around Canmore in 1963, and by April 1965 Hans was leading his first commercial trips in the idyllic Bugaboo Mountains, south of Golden, BC.

Gmoser’s company Canadian Mountain Holidays and the creation of heli-skiing is a celebrated chapter in mountain culture lore. Far less appreciated is how quickly some enterprising folk at the fledgling Whistler Mountain Ski Resort followed suit.

Pacific Ski Air began operations during the winter of 1967-68, started by a group of upstart twenty-somethings working in partnership with Okanagan Helicopters. For a shockingly low price you could get multiple runs on the vast north-facing glaciers of Blackcomb Mountain and the Spearhead Range.

Tours were usually capped off with a drop on Whistler Peak, nearly 20 years before the construction of Peak Chair. Needless to say this final lap down Shale Slope, in full view of the resort-bound skiers, was great marketing.

They were quite adventurous days: charting new terrain, learning how to better operate the helicopters in the high alpine in the middle of winter, guerilla marketing for new clients, and, of course, skiing endless amounts of flawless powder.

We are extremely excited to share with you that the Whistler Museum’s next Speaker Series event will feature Whistler heli-ski pioneers Cliff Jennings and Jamie Pike, as they share their stories and photographs from this early halcyon era. The evening presentation begins at 7pm on Wednesday January 20th (doors at 6pm). General tickets are $10, while museum members and Club Shred members get their tickets for half price. See you there!

All photos by Cliff Jennings.

While looking through our artifact collection this summer we stumbled upon a familiar item: an Okanagan Helicopters baseball cap in the trademark orange and blue. We recognized the cap’s distinctive hummingbird logo because a helicopter enthusiast we know [Editor’s note: Jaimie’s father] has the exact same hat, but we were unsure why this hat would be part of our artifact collection.

The hat in all its orange glory.

Heli-skiing in the Whistler area has long been a popular activity, since the choppers provide access to the glaciers and backcountry areas for skiers looking for prime powder skiing. Pamphlets from the museum’s research files reveal that a bevy of helicopter companies were involved in providing heli-skiing tours, including Canadian Helicopters Ltd (one of the companies which Okanagan Helicopters became when it was restructured in later years, who also had a hummingbird logo).

Franz Wilhelmsen and Willy Shaeffler with an OK Heli, 1960s.

Issues of the Garibaldi Whistler News going back as far as 1970 also prove that Okanagan Helicopters was the one of, if not the, first company offering heli-skiing services in the Whistler area. The company was allied with skiing superstar Jim McConkey, who was the Director of the Garibaldi Ski School at the time and acted as the guide on heli-skiing trips.

Once the decision was made to make the resort a reality, Okanagan Helicopters was called upon again. Construction of the lift towers was done before ground transportation up the mountain was feasible, and helicopters were thus  chosen the construction vehicle of choice. When the Garibaldi Olympic Development Association (GODA for short) was formed to promote Whistler Mountain as a potential host for the 1966 Olympics Glen McPherson, the president of Okanagan Helicopters, was on the committee due to the company’s important role in the construction of the resort.

The hat itself is most likely from the late 1970s or early 1980s – before Okanagan Helicopters became Canadian Helicopters Ltd and CHC in 1987- but the legacy of how it came to be in the collection goes back almost 20 years to the very beginning of the Whistler-Blackcomb resort.

Posted in From the Archives, Ski-Town Stories