The suitcase race discussed in last week’s blog post was co-opted by the Pepsi Celebrity Ski Invitational in 1987. The organizer of this event, Bruce Portner, stated in the article Hundreds pull together for publicity event by Larry McCallum, that many celebrity events do not succeed which is why “the two and one half days will have to be packed with eye-catching, unusual activities to appeal both to the celebrities and the media”. Flinging yourself down a ski hill on top of a suitcase certainly fits into that category. CP Air sponsored the suitcase race and the Star dinner event raised $30,000 for helping to immunize children against polio.

Many stars attended this event including Richard Roundtree who played John Shaft in the Shaft movies, and TV series. He also made appearances on shows such as The Fresh Prince of Bel-Air and Heros. Olivia Barash known for her roles in Fame (1987), Out of the Blue (1979), and Patty Hearst (1988) also attended the events.

Richard Roundtree getting ready for the race. Photograph by Greg Griffith. Griffith Collection. 1988

The next year (1988), the Pepsi Celebrity Ski Invitational Act II took place in the middle of April. The Black Tie Ball promised “A full Hollywood-style variety show” with Dynasty’s own Emma Samms as host, and performances by Platinum Blonde and Mary Wilson of the Supremes. 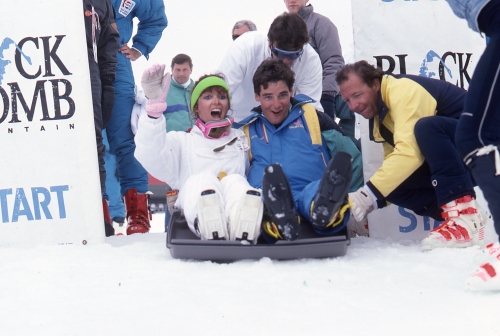 The Pepsi Celebrity Act III took place on April 13th to the 16th, 1989. On April 13th, 1989 the Whistler Question published an article stating that the goal of this year’s Suitcase Race, which was sponsored by American Airlines, was for two teams of two racers to sit in a suitcase and “speed down the slope above the Solar Coaster quad chair.” The object was not only to be the first across the finish line but also to “make it down the slope without falling out or flipping over the plastic luggage case.” 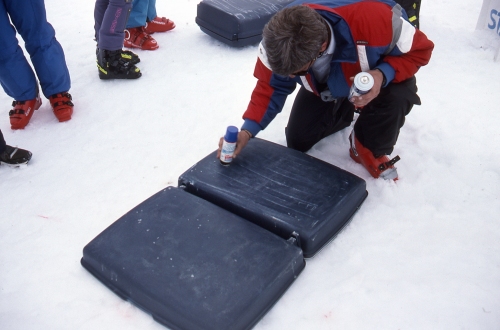 Emma Samms returned to Whistler for the Pepsi Celebrity Ski Invitational of 1989. The proceeds of the weekend were once again donated to the Starlight Foundation,  founded in 1982 by Samms and her cousin Peter Samuelson, which grants wishes to chronically ill children.

The 1989 event boasts stories of Tommy Lee of Motley Crue getting a Ski Esprit instructor to help find gloves that he dropped from the chairlift, as well as Lee nearly taking out the race shack at the bottom of the Orange race course on Whistler Mountain. Another story from the event describes Gil Gerard (who played Buck Rogers in the Buck Rogers TV show) accidentally stabbing Sean Vancour with his ski pole.

After Act III had concluded there was a lot of talk about the event not continuing. As far as I can find, from digging through the Whistler Question archive, there were no more Pepsi Celebrity Ski Invitational’s or suitcase races held on Blackcomb Mountain.