This Week In Photos: June 21

This week in the 1980s was apparently all about the kids of Whistler, with the majority of the photos having to do with the Myrtle Philip School sports day, ballet recitals and the Whistler Children’s Art Festival. 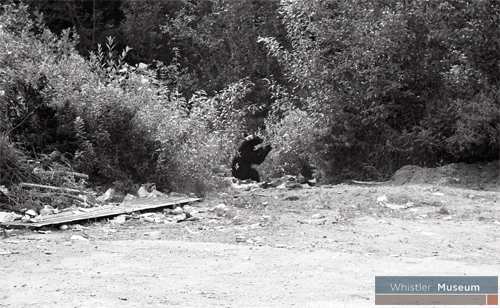 Refuse lies scattered all over the Rainbow substation bin site as a result of crows, people and bears. Council has promised to put a compactor in this location.

The buildings and chairlifts on Blackcomb begin to take shape. The mountain is set to open for skiing this winter. 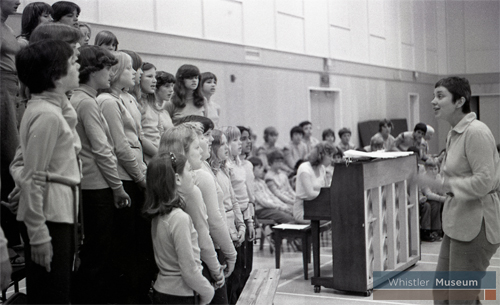 The female half of the 58-member Kildala choir from Kitimat. The school group sang a number of popular tunes.

Carol Fairhurst (left) and Cathy McNaught plan to continue their education – one in Mexico and the other in Calgary. 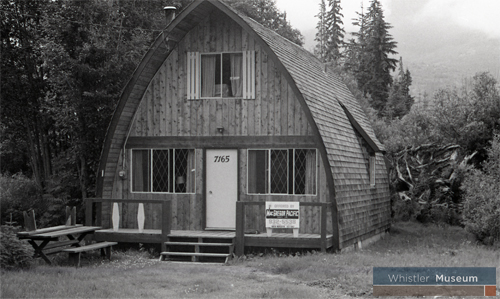 A classic example of the Gothic arch home. Though not as common today, houses like these can still be found throughout Whistler. 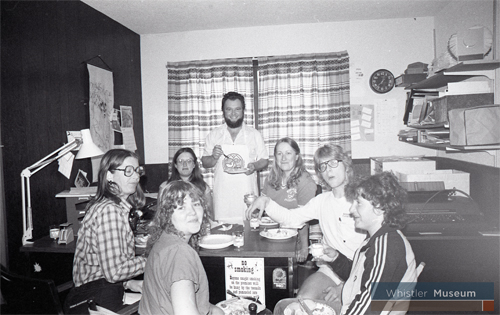 It’s not clear if this is a Whistler Question staff meeting or staff meal. The best part, however, may be the “No Smoking” sign on the table that threatens those who try will be hung by their toenails.

Whistler’s new mascot (the as yet un-named marmot) shows off for students.

John Reynolds, co-owner of Tapley’s Pub, presents Robert Miele, treasurer of the Whistler Athletic Association, with a cheque for $1000. The donation will go towards funding amateur athletics in the valley. 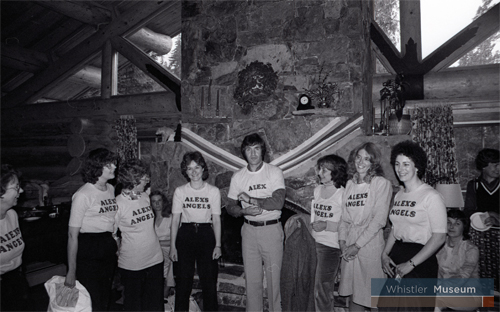 Myrtle Philip Elementary School principal Alex Marshall is surrounded by his Angels at his ‘roast’ on Wednesday night.

Whistler Ballet students who performed in Garibaldi School of Dance production of “The Steadfast Tin Soldier” and “Little Matchgirl”. The performance on Sunday, June 21 at The Centennial Theatre in North Vancouver was a complete sell out. Left to right: Brie Minger, Corinne Valleau, Jodi Rustad, Rachel Roberts and Melanie Busdon; Peaches Grant sitting.

Hot Wheels – Students at Myrtle Philip Elementary School show off their creative talents in the bike decorating contest. The event was scheduled in conjunction with Sports Day which was moved inside because of the weather. 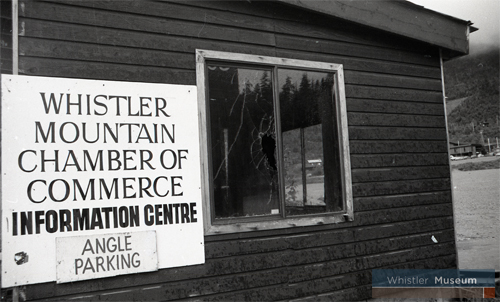 A beer bottle was thrown through the window of the information centre.

Competitor in the First Annual Whistler Off-Road Bike Race soars over a bump en route to Lost Lake and 25 miles of heavy pedalling. 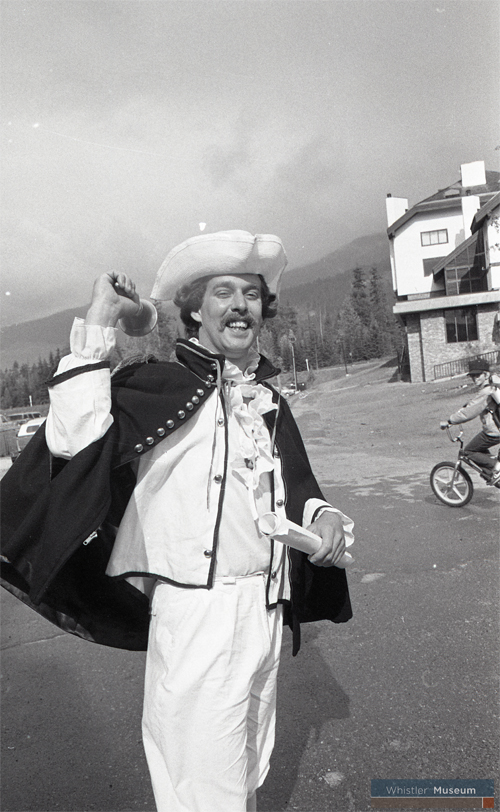 Captain Beckon rings out the good word on the Children’s Art Festival.

Isobel MacLaurin shares her sketching talents with larger artists during one of the many workshops.

The Pied Pear duo, Rick Scott and Joe Mock, perform with a little help from some members of the audience.

Three Whistler divas (l – r) Melanie Busdon, Jodi Rustad and Corinne Valleau took part in the Garibaldi Shcool of Dance performance of “The Sleeping Princess” in Squamish and North Vancouver June 17 and 18. All shows, directed by Lynnette Kelley, were sold out.

Clearing in by a mile Sean Murray (11) heads back to each leaving the high jump pole standing at 100 cm. It was a dripping wet sports day for students at Myrtle Philip School Wednesday but all events went on without a hitch under the eaves and in the school gym instead. 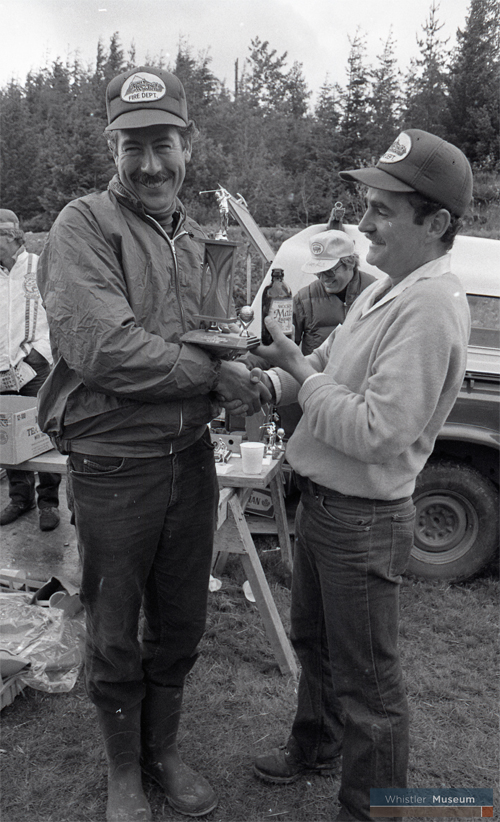 The Extraordinary Clown Band was one of the highlights of this year’s Children’s Art Festival held Saturday and Sunday. While the band entranced youngsters with feats of juggling and slapstick, 65 workshops featuring pottery, break dancing and writing as well as many other artistic pursuits took place in Myrtle Philip School.

Harley Paul and Bryan Hidi were just a ‘hanging’ around Friday in between events at the Myrtle Philip School sports day. Sports day events included a three-legged race for parents, nail-banging contest, long jumping and, of course, balloon sitting. 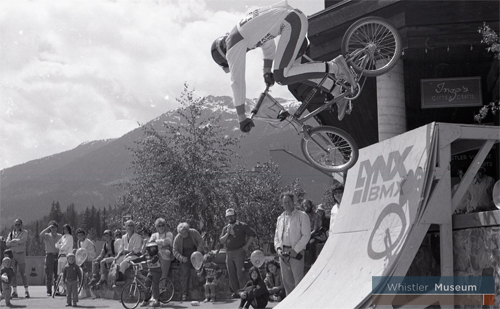 A team of BMX freestyler cyclists added to the weekend’s festivities and gave Whistler just a taste of what things will be like here next summer when the BMX World Championships come to town. Two young performers on BMX bikes travelled from Pitt Meadows to represent the Lynx factory team. 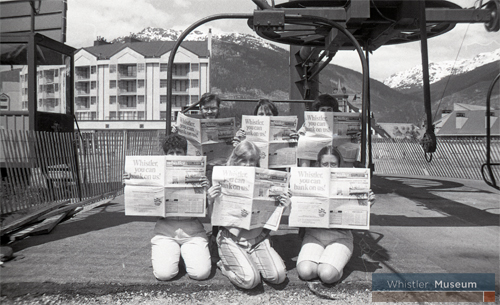