When we post images on social media it’s hard to predict which will be particularly popular and start conversations.  Recently we posted a few photos of Parkhurst on Instagram and the response we received showed that while many people find the history of the area interesting, many are also surprised to learn the stories behind the ghost town.  (If you aren’t already following the museum, you can find us @whistlermuseum.)

The photos we shared, some of the first colour images of the mill site we have received, were brought to the museum by Ronald Clausen who lived at Parkhurst with his parents in the 1950s.  Along with the photos Ronald also provided an account of his childhood memories from Parkhurst. 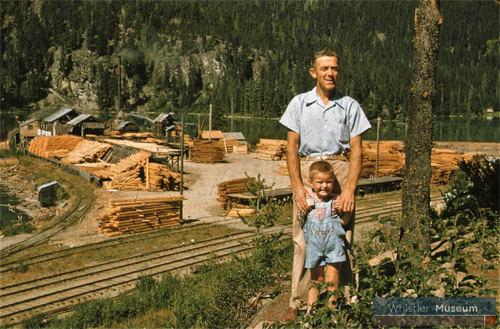 Ronald and his father pose above the Parkhurst mill site. Clausen Collection.

John (Aage) and Birthe Clausen emigrated to Canada from Denmark in 1950 and, after some time in Vancouver, arrived at Parkhurst in 1954.  The family lived there seasonally for two years, returning to Vancouver over the winters when the mill was closed.

When they arrived the first spring the family found a house infested with vermin, quickly dealt with using a “disinfectant bomb”.  After a thorough cleaning and some repairs the home appeared neat and tidy and even had a small garden added in the front. 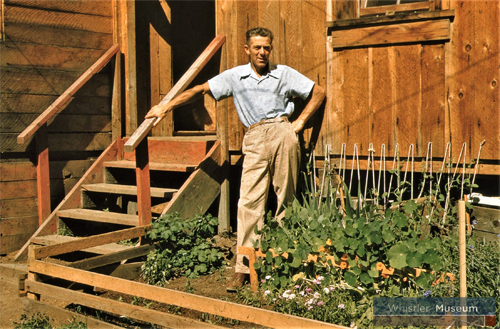 John Clausen stands in the garden outside the family’s home. Clausen Collection.

The Clausen’s home, like the other houses in the small settlement, was located on an embankment above the train tracks along Green Lake.  Ronald remembers playing outside as a small child and accidentally rolling down the embankment to the tracks below.  As he recalls, “Getting up after the fall, dirty and frightening, and looking up from the tracks, along with my mother and my home out of sight, the world at that moment felt immensely big.”

A small collection of houses stand in a clearing above the Parkhurst mill site. Clausen Collection.

As a child Ronald experienced life at Parkhurst from a different perspective than seen in other accounts of Parkhurst.  His memories include items and events that a child would remember, such as the Sugar Crisp cereal his parents sometimes included in their weekly grocery orders delivered by train, and many of the photos are images of childhood milestones such as birthday parties, Halloween costumes and community picnics. 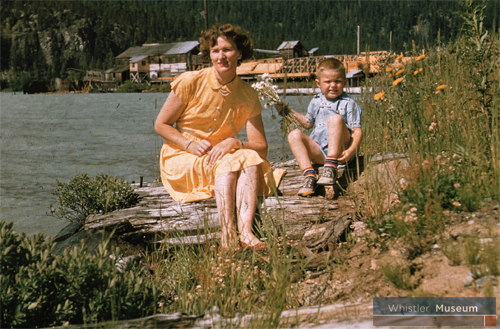 Ronald and his mother would pick fresh flowers on many of their walks. Clausen Collection.

Ronald and his mother spent a lot of time exploring the area while his father was at work.  They would walk by the shore of Green Lake (where there was sometimes the added excitement of the tugboat at work) or walk out to Lost Lake or the sandbank.  Often they would walk over to visit Lloyd, a friend the family had met in Vancouver who did administrative work at Parkhurst.

For Ronald these visits are remembered fondly.  It was exciting to walk along the trail under the huge trees, and even more exciting to get one of the cellophane wrapped chocolates that Lloyd kept in a jar.  These made a lasting impression, as Ronald claims “Even today, when I open and eat a small wrapped candy, I think of having done the same thing under the fir trees of Parkhurst on my way home from Lloyd’s more than sixty years ago.” 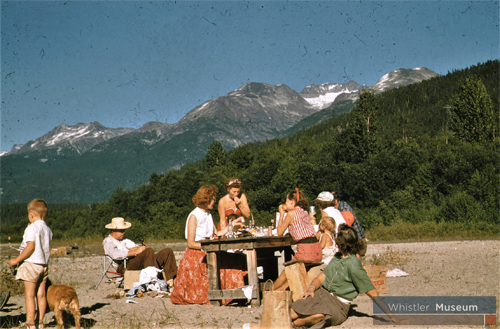 A Parkhurst community picnic on the shore of Green Lake. Clausen Collection.

Though his parents lived there for only two years and later moved back to Denmark in 1971, their memories of the area were cherished and shared with friends through their stories and slides.

Ronald revisited the remains of Parkhurst during his last visit to Whistler and he closed his remembrances with this wish: “Today the buzz of saws at the sawmill and the laughter and conversation of Parkhurst people gathered at picnics, Halloween celebrations, birthday parties and dances sound no more, but hopefully the recollection of the little town will live on.”

You can take a look at the rest of the Clausen Collection here.