The Whistler Museum Needs Your Help!

The Whistler Museum is searching for volunteers to help with our IronMan Run Aid Station on July 29th!

We’re only 11 days out and we need some more volunteers!

Once again the Whistler Museum staff and a team of amazing volunteers will be operating a Run Aid Station, handing out ice, water, energy drinks, snacks and more while cheering on the participating athletes (we also try to maintain the cleanest aid station by ensuring we are picking up and recycling as we go).  The money received by the Museum from IronMan goes straight to the Collections Department to help grow and maintain our archives and artefacts. 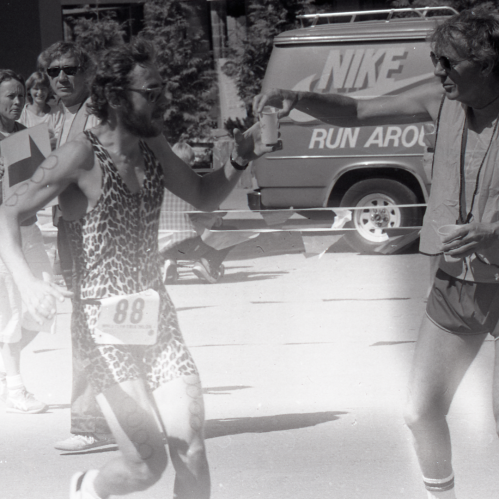 The aid station job hasn’t changed much since the Whistler Triathlon in 1984, though we can’t guarantee any animal print outfits. Photo: Whistler Question Collection, 1984

All volunteers are provided with dinner, are invited to attend the Volunteer Appreciation Dinner, are entered to win prizes and get an IronMan Volunteer t-shirt.  If you haven’t had a chance yet, this is also a great chance to meet our summer students!

We are back at a our usual location this year!  We will be manning Run Aid Station #10 (the final Run Aid Station) on Blackcomb Way (near Settebello Drive) from 5:30-11:45 pm.

If you’re interested in helping out, you can call us at the museum (604 932 2019) or sign up here.  Scroll down until you find Run Aid Station #10 and select shift #2.  Then just keep scrolling and fill out the information at the bottom of the page.  Click Sign Up To Volunteer and you will be automatically added to the shift.

We greatly appreciate all the wonderful volunteers who come out to help the Museum raise some funds while having a lot of fun!

The Whistler Museum Needs Your Help!

The Whistler Museum is searching for volunteers for our IronMan Run Aid station on July 30th!

Once again the Whistler Museum staff and a team of amazing volunteers will be operating a Run Aid station, handing out ice, water, energy drinks, snacks and more to the participating athletes.  The money received by the Museum from IronMan is used in the Collections Department to help grow and maintain our archives.  All volunteers are invited to attend the Volunteer Appreciation Dinner and get an IronMan Volunteer t-shirt.

If you’ve volunteered with us for IronMan in the past, things will be a bit different this year.  Instead of being at the final Run Aid station in the Village, the Museum will be manning Run Aid Station #4 at Nicklaus North from 4 – 10:30 pm.

Rain or shine, we’re there to hand out whatever the participants need at that stage of the race.

We greatly appreciate all the wonderful volunteers who come out to help the Museum raise some funds while having a lot of fun!

If you thought a regular triathlon seemed daunting, then the 140.6-mile course that makes up Ironman Canada will probably make you shake in your boots. The track consists of a 2.4-mile swim in the waters of Alta Lake, followed by a 112-mile bike course, and ends with a 26.2-mile marathon that finishes in Olympic Plaza for all to see (yikes!). Competitors have a strict time limit of 17 hours to complete the entire course in order to receive ‘Ironman’ status. For all those wanting to compete, it is advised that you start training well in advance.

The final leg of the triathlon involves a 26.2-mile run along the Valley Trail.

Whistler’s Ironman triathlon is only one of several long-distance races organized by the World Triathlon Corporation that take place all over the world. What was once the original Ironman race has now become the Ironman World Championships, held in Kailua-Kona, Hawaii annually since 1978. To qualify for the championships, one must successfully finish in one of the top spots during a qualifying Ironman event. Some notable competitors include Australian triathlete, Craig Alexander, who is a 3-time Ironman World Champion and currently holds the record for fastest Hawaii course time, and Natasha Badmann, 6-time winner of the World Championships and the first European female to win the competition. This year, Ironman Canada will be offering 50 qualifying spots for the World Championship.

The Ironman triathlon is considered to be one of the most difficult sporting events in the world. Athletes usually begin training at least 6 months prior to race day.
Photo from http://www.ironman.com

Despite the long-standing tradition of the race, Ironman Canada is relatively new to Whistler. Our world-class resort first hosted the competition in 2013 and has enjoyed 2 successful years thus far. Hosting the race in Whistler allows contenders to take in pristine mountains and breath-taking scenery (literally, they’re going to be out of breath), while competing in one of the most difficult one-day sporting events in the world. 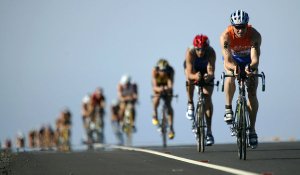 The biking portion is the longest section of the triathlon, consisting of a 112-mile track running along the Sea-to-Sky highway into the Callaghan Valley, back through Whistler, and up toward Pemberton.
Photo from http://www.nytimes.com

Ironman will be taking place in Whistler on Sunday July 26, 2015. Whistler Museum & Archives Society will be there at our Run Aid station, enjoying the race and keeping the athletes hydrated. We’re bringing along some amazing and generous volunteers, and the money awarded for our volunteer participation will be used on essential archival materials for our growing collection.