With locals and tourists driving back-and-forth across B.C. in a matter of hours on the daily, it is easy to forget that transportation throughout the province was not always this simple. For this blog post, we’re going to be focusing a little less on Whistler itself and more on the history of the Cariboo Gold Rush. To begin, let’s take things back a century and a half, all the way to the time of the Old West.

In the 1850s and 60s, we were still a fair ways away from the invention of the automobile. Thus, all transportation around this time was done via horse and stagecoach. One of the oldest, longest, and perhaps best known stage coaches in North America was Barnard’s B.C. Express, founded by Francis Jones Barnard in 1860. The coach started out as really more of a pony express, servicing the area between Yale and Barkerville, B.C. By 1867, Barnard’s coach line had expanded to cover 110,600 miles, employing thirty-eight men and incorporating many of the competing companies. The transportation route also acted as a mail service. At this time, the coach line was widely known as “the B.X.” by all that were familiar with it.

Barnard’s Express stopped at Yale. Photo from the Provincial Archives.

Having served the Cariboo Gold Rush since 1861, the B.X. hauled over four and a half million dollars in 1865 alone. While there were eventually armed guards that accompanied the stages, for many years it was solely the driver in charge of safely delivering the loot. Though several robberies were attempted, very few were actually successful. Nonetheless, this didn’t deter one particular robber from trying and succeeding, and his story would later come to be a legend. 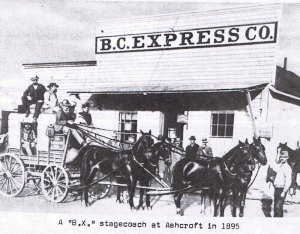 Photo from the Ashcroft Museum Archives.

It was a hot day in July 1890 when a six horse BX stage, headed from 100 Mile House for Yale, was held up at the top of a long hill near Bridge Creek. While waiting, the unarmed driver, Steve Tingley, was startled when he heard a voice from the bushes demanding he throw up his hands. After seeing a man masked by a red bandana emerge from the trees with a rifle in hand, the driver proceeded to do as he was told. The robber demanded the heavy strongbox that the coach had been carrying, which contained over $15,000 in gold nuggets and bars, and Tingley quickly surrendered it. The mystery man disappeared and the stage carried on unharmed. Though the driver reported the robbery upon reaching Ashcroft, he could not identify the bandit. 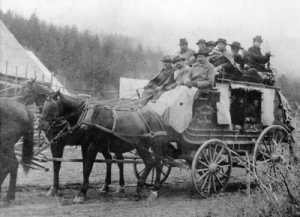 Not long after this, a man named Samuel Rowlands started making large deposits of gold at the bank, claiming he had struck rich at Scottie Creek. This started a small gold rush to the area, though no one other than Rowlands ever seemed to find gold. The authorities became suspicious of the lone miner and decided to hold back some of the gold from one of his recent deposits. After a thorough examination, it was revealed that the gold Rowland had came from many different streams, as opposed to Scottie Creek. The police concluded that he had to be the stage robber, and promptly arrested and sentenced him to 12 years in the New Westminster penitentiary.

Two years into his sentence, Rowlands busted out of jail and disappeared, never to be seen again. The legend tells that only $3000 worth of the gold was ever recovered, leaving $12,000 still missing to this day. Whether he reclaimed his gold before disappearing, or whether it is still hidden remains unclear. What we do know is that Samuel Rowlands made quite the name for himself as “The Bandit”, even having a cider named after his story tale nickname.