Alpine caretakers recall their stories from above the tree line

It’s tough to imagine Whistler Mountain without snowcats. The way their eyes flash in the night as they crawl over the dark mountain slopes, hissing every now and then… Hissing? Of course, we are talking about Schoki, the snow-loving feline that lived on top of Whistler Mountain with Janet Love Morrison and Gordy Rox Harder who were the alpine caretakers in the late 1980s – yes, back in those days the mountain actually had caretakers. 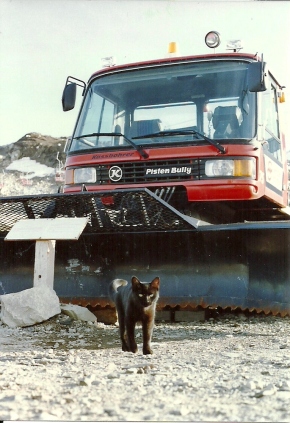 The three musketeers had their 600 sq ft home in the Alpine Service Building close to the top of the Red Chair. Shortly after moving up there, Janet and Gordy got the button-eyed “panther” from the SPCA in Squamish. Janet had spent some time in Switzerland. So they named the cat “Schoki,” the Swiss German expression for “chocolate”. The fluffy lap-monster was a welcomed staff member as there were mice in the building that also contained the ski patrol room, staff lunch room and several maintenance offices.

Like her truck-sized, fully tracked “brothers” there was no hill too steep and no snow too deep for Schoki. She loved the snow. Janet and Gordy couldn’t let her out during the day. But after the skiers and the staff had gone for the day, she’d head out. “She used to follow me to Tower 18, the top of the Red Chair, to shut down the lift and back”, recalls Janet. “She was like a dog how she’d follow us around.”

Gordy and Janet’s fellow mountain dweller really was a “queen of the hill”. She was an independent. Her favourite spot was on the windowsill. From there she would enjoy the scenic mountain views, taunt the avalanche dogs, and bewilder unsuspecting skiers. Janet remembers hearing skiers going by the kitchen window on the Little Red Lift calling out in surprise, “There’s a cat up here! I think we should tell someone there’s a cat up here!”

Growing up in the alpine, Schoki was tough and loved the snow. Photo courtesy: Janet Love Morrison, Gordy Rox Harder

But the funniest adventure was when Janet and Gordy had to take Schoki to the vet. “Gordy put a blanket in his backpack, and she nestled in there and we skied to the valley. Part way down her little head peeked out of his backpack; it was quite the sight to see a cat peering out of a knapsack cruising down Gondola Run, which is today’s Dave Murray Downhill” laughs Janet.