The Whistler Answer Has Turned 40!

“For those tired of questions… the Whistler Answer.”

If you heard bursts of laughter and rad tunes echoing over Alta Lake on Saturday night, it wasn’t some high school house party – it was the sound of those early Whistler hippies and ski-bums partying the night away at The Point for the 40th anniversary party of the Whistler Answer.

Partygoers at The Point last Saturday, April 1 for the Answer anniversary party.

Marketing itself as the satirical flipside of the Whistler Question, the Answer was a local alternative newspaper dreamed up by Charlie Doyle, Robin Blechman and Tim Smith as a comedic response to the more serious Question.  The winter of 1977 was cold but desperately lacking in snow, causing many residents to head for warmer climates.  The Answer acted as a kind of letter from to travelling Whistlerites and catered to the town’s hippie ski-bum culture with a tongue-in-cheek style attributed by many to editor Robert “Bosco” Poitras (then Colebrook).  The early issues were created completely by hand at a local squat – hand-written, hand-drawn and hand-pasted with Scotch tape and white glue.

Publication began in 1977 and ended in 1982, although it was revived from 1992 – 1993.  Flipping through the Answer provides a window to the “Old Whistler”, an idyllic era that pre-dates our valley’s current hyper-development and insane visitor numbers.

In the same way, Saturday night’s Whistler Answer 40th Anniversary party at The Point was a wormhole to a Whistler in the days of the Answer, with all its lively local characters and a reunion performance by Foot in the Door, the band of Answer publisher Charlie Doyle, Mark Schnaidt and Rocco Bonito.

Charlie Doyle and band members perform at the Whistler Answer Benefit at the Mountain House Cabaret in 1981, during the Answer’s first run.

The night started out with a dinner of Bushwoman’s Chinese Cuisine followed by some hilarious tales from Doyle and others about the publication.  Several readers stepped up to share their favourite Answer passages – including an insightful book review of the local BC-Tel phonebook.  In the midst of these retellings, the party was crashed by three nude-suited hippies covered in bush and branch – supposedly the three individuals pictured canoeing in the Answer’s first issue front-page article: “Missing on Alta Lake”.  An auction was also held for original copies of the Whistler Answer and Whistler’s superhero comic “Localman” with proceeds going to the organizers of the event. 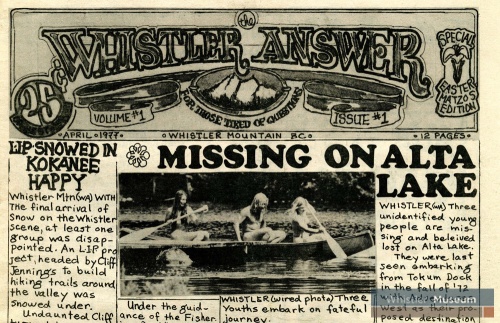 The first issue of the Answer featured a photo of three canoeing individuals “lost” on Alta Lake.  Find the full issue online at the link below.

Foot in the Door then took to the stage to bring back some choice tunes from the days of the Answer, to the joy of the dancing crowd.  The show also included improv acts by Get to the Point Improv and more great music by Some Assembly Required and the Skunk Cabbage Revue. 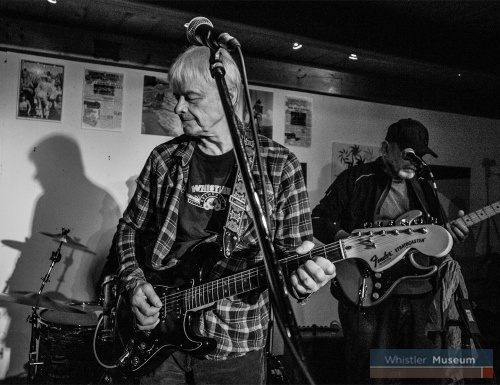 Foot in the Door reunited to perform at The Point for the Answer’s 40th Anniversary.

The packed heritage lodge was full of hugs, laughter and old friends meeting again in what can only be called the closest we’ll ever get to reigniting the spirit of the infamous Toad Hall parties we at the Museum hear so much about.

To browse all issues of the Whistler Answer in full, check out the Whistler Museum’s digitized versions of the colourful local paper: http://www.whistlermuseum.org/whistleranswer