This Week in Photos: April 26 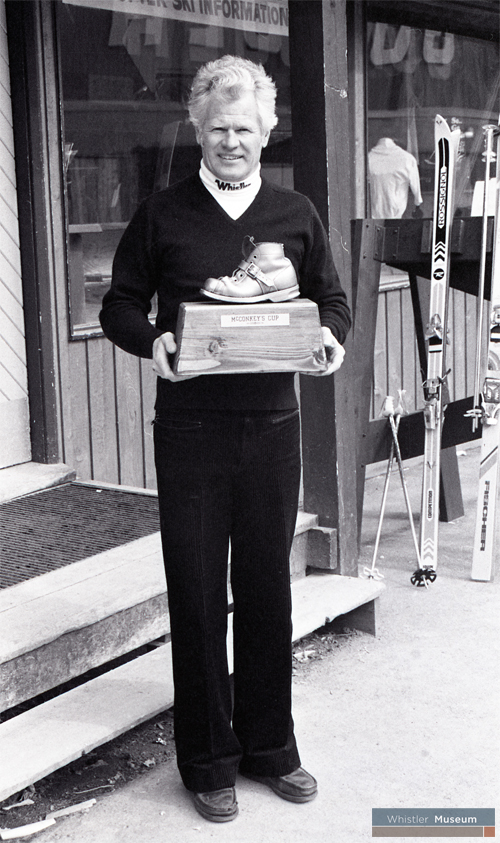 Kris Shoup instructs John Garnet in the school mini-course knitting class while Serap Graf and Monica Niederlich concentrate on the task at hand. 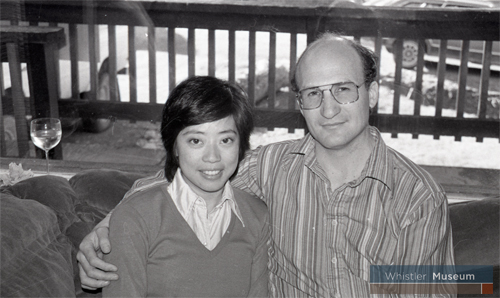 And the winners are: (L to R) Tom Simister, Richard Juryn, Perry Rousseau & Debbie Wood – with the Whistler Cup. 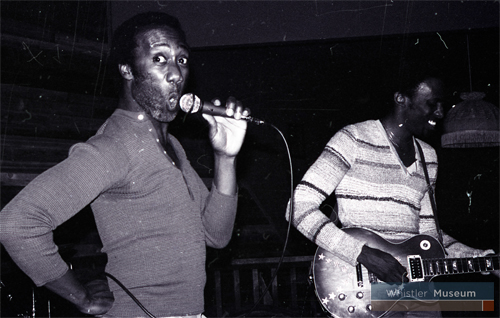 May the Force be with you. Ezekial and His Force rock and reggae it up at the Mountain House until May 2. 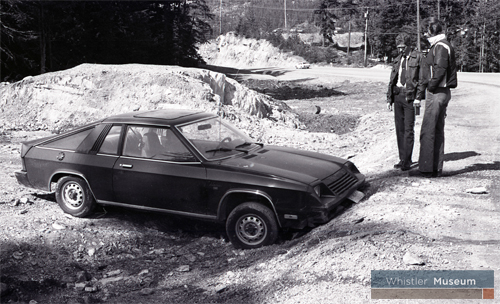 Constable Klaudt of Whistler RCMP and Ron Mallinson of Ike’s Towing try to figure out how this Plymouth Horizon ended up in the ditch by the Alta Lake Inn turnoff late on Saturday, April 25!

Survivors of the April blizzards, these crocuses stand proudly in Whistler Village. 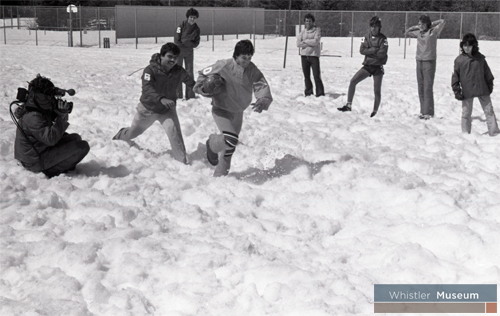 Youngsters give it their best during an end-of-season match of Snowball (created by Doug Calder) held at Myrtle Philip School grounds. 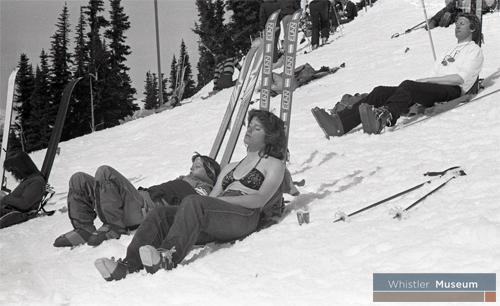 Skiers on Whistler enjoyed the sun as much as the runs Sunday. 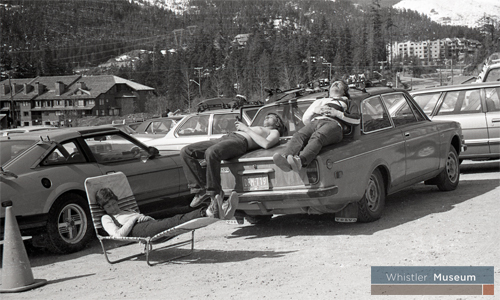 After a day on the mountain, a little recovery is in order. A siesta helps revive tired muscles.

Two contestants go under the pole during Friday’s Caribbean Night held at L’Apres. Michael Chidley limboed his way to Mexico taking first place in the competition. Val Wong’s style won her first prize in the women’s competition and a heli-skiing trip.

A top-notch mogul basher takes one of the two required air times in his run down Whistler’s Raven run in the Schloss Laderheim Dual Mogul Classic on Sunday, April 24. 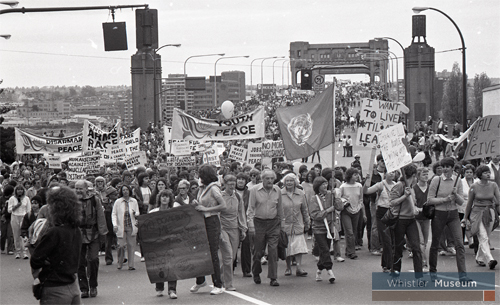 A march protesting nuclear weapons makes its way through Vancouver towards Stanley Park. 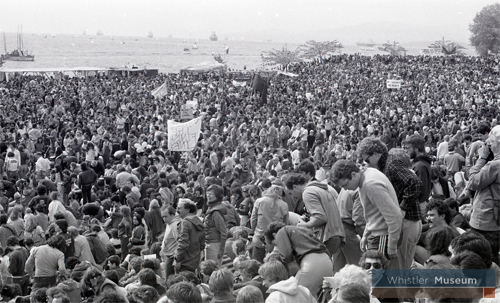 Bill Runge of Whistler Mountain Ski Corp. fastens down the village’s newest signs on Monday reminding ski enthusiasts to keep heading south to the Gondola side of the mountain.

Got the summertime blues of what to wear this season? Not if you were at The Keg’s Fashion Show Sunday, April 24. 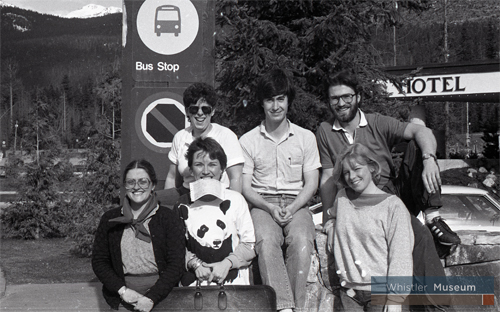 The Whistler Question staff pose for a sunny photo in the Whistler Village.

Dr. Peter Oberlander of Vancouver is the lucky winner of a lifetime Whistler/Blackcomb ski pass. The final draw of the Whistler Rotary Club lottery was held Friday afternoon, and proceeds from the sale of tickets go towards the Whistler Health Planning Society. Rotary Club President Geoff Pearce drew the winning ticket. 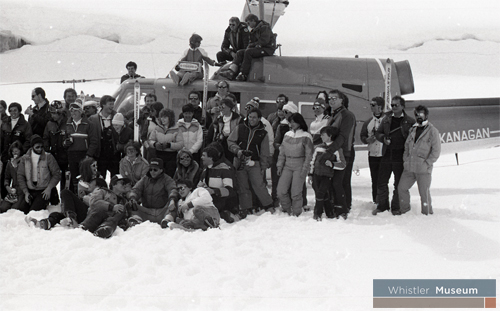 While most people brought along only skis and sunglasses, Pascal Tiphine thought to import a little champagne, which he literally splashed into anyone who didn’t ming a few bubbles up their nose. 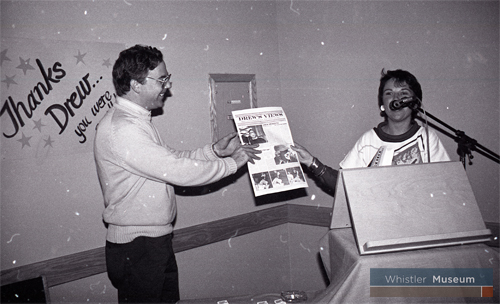 The surprised look on Drew Meredith’s face was no surprise, considering that 100 people were gathered at the Carleton Lodge Wednesday night to pay tribute to him. Meredith, who thought he was coming to attend a meeting, listened to roasts and toasts throughout the evening, which paid tribute to his work as Interim Director during the toughest year in the history of Whistler Resort Association.

It was an Easter sunrise service without sunshine, but that didn’t stop approximately 80 people from attending the special 7 am service Sunday morning on the shores of Lost Lake. Molly Boyd, playing the organ, led the Whistler Singers who also turned out in full force.

This Week in Photos: March 22

A doctors group from Japan who are regular Whistler visitors. Fourth from left is Mr. Yamanaka who is making his 10th visit here and in the centre is 68-year old Dr. Kanazawa and 73-year old Dr. Takahashi, both on their 6th visit here. 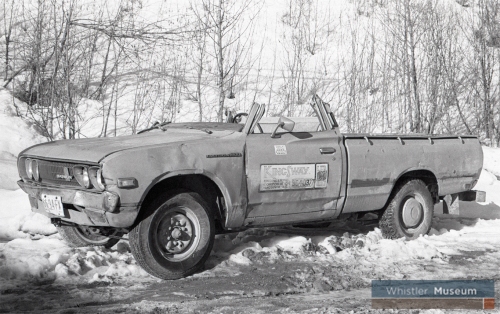 CONVERTIBLE PICKUP! – All that was left of the Datsun that the Squamish Rescue Group cut the top off of to get an injured passenger out at Daisy Lake last week. 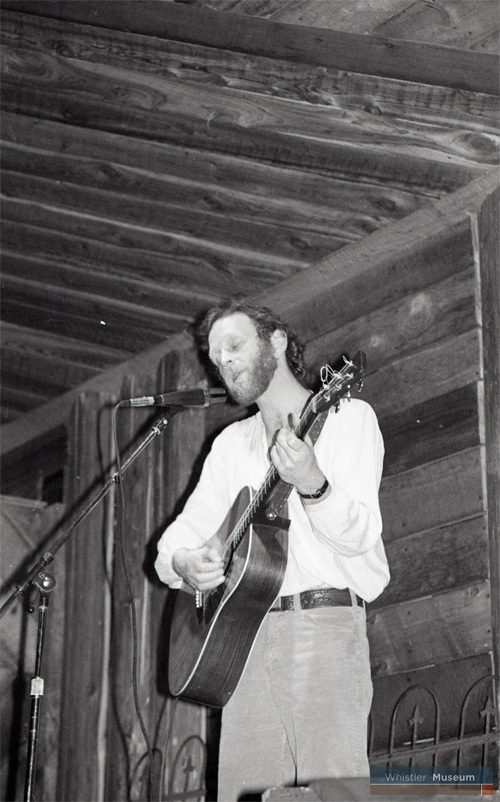 Valdy performs at the dinner show at the Filling Station Thursday night. 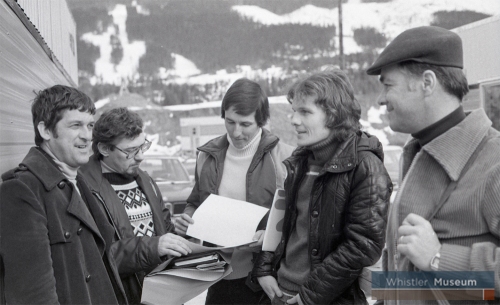 The walls of the entrance to Club 10, decorated by Ray Clements. 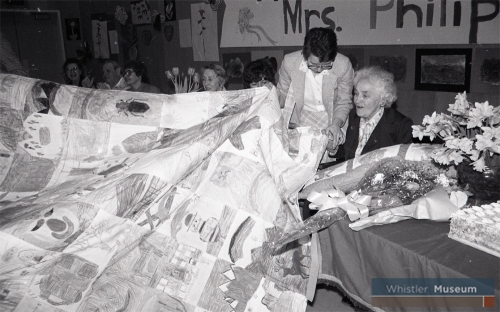 Myrtle Philip, assisted by Roberta Carson, proudly displays the hand-drawn quilt presented to her by the Myrtle Philip School students on the occasion of her 90th birthday.

The students of Myrtle Philip School presented Myrtle with 90 daffodils at her birthday celebrations. 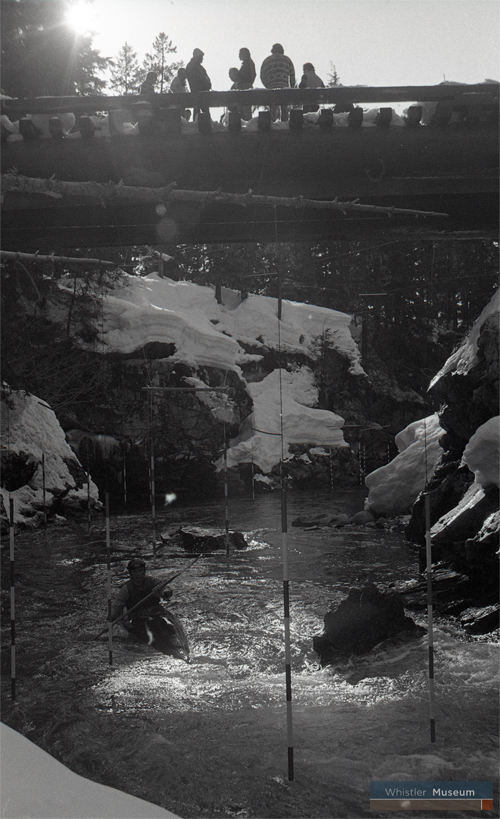 A kayaker heads down the Cheakamus under the bridge in the Ice Breaker race March 21.

Staff photographer freezes the snow avalanche on film as it roars off the roof of the Whistler Sports & Convention Centre on Friday. Burrows Photo.

Moments before 50 tons of snow slid from the roof of the Sports & Convention Centre, Doug Fox, Cliff Jennings and crew tried shovelling snow away from facia beams.

Keep moving is right! Someone with a sense of humour then added the sign on the left to the warning on the right. 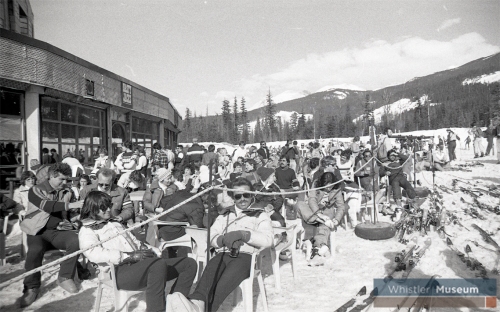 Spring skiers enjoy a sunny afternoon on the patio of Nasty Jacks. 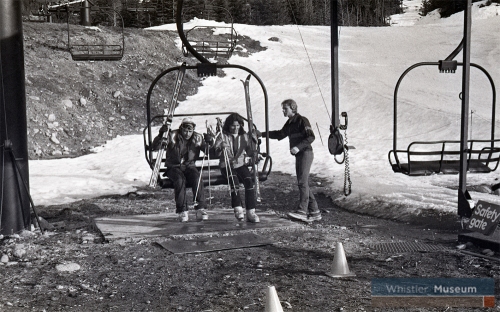 Watch your step. Downloading has become a sensible way to get off the mountains these days as spring weather works its way up the slopes.

While the skier’s away, the Whiskey Jack will play. This little fellow had few qualms about helping himself to someone’s lunch while the owner was out on the slopes. 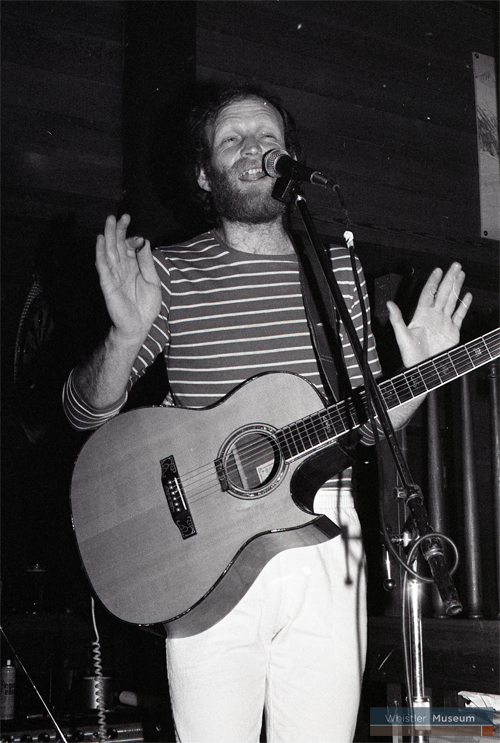 Valdy packed the house all three nights of his visit to Whistler March 18, 19 and 20. Accompanied by saxophone player Clare Laurence and Norman McPherson on guitar, he played everything from love ballads to a lament that he couldn’t shimmy like his sister Kate. 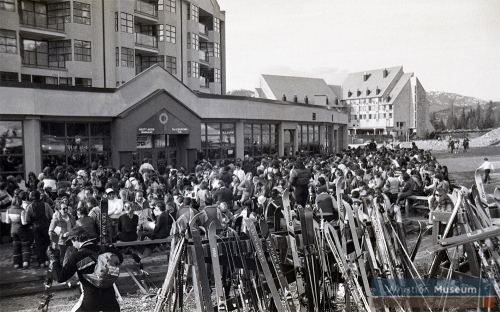 Whew! It was a full house at The Longhorn and Nasty Jacks over the sunny March 19-20 weekend. Spring skiers are flocking to Whistler by the thousands to enjoy that last run before summer sets in.

Gwen Upton, of the Ministry of Labour, takes a look at what her department’s money is doing for Whistler through the Community Recovery Program. Al Bosse and Ian Mouncy have found winter employment making subdivision signs. Looking on at far right is Jim Webster from the Resort Municipality of Whistler.

The Winter Hawks celebrated a victory together this week.

Raw energy, raw blues, and the velvet voice of John Hammond made a 2 1/2-hour concert at Brackendale Art Gallery Saturday seem like five minutes. Hammond has cut over 20 albums since 1962, but is still one of the lesser known bluesmen in North America. 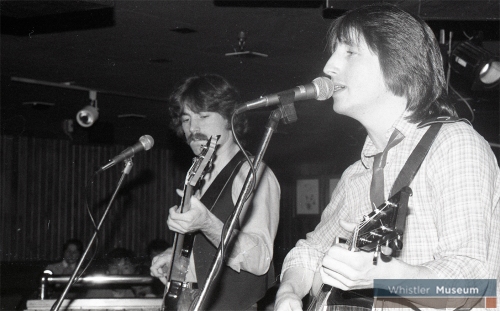 The lyrics are poetry, the melodies are mellow. Silvered, comprised of Australian musicians Ken Kirschman and Geoff Gibbons, are masterful musicians reminiscent of Simon and Garfunkel. A recent EP release has generated rave reviews. Silvered were featured at The Brass Rail Wednesday through Sunday.

For some places in Canada the beginning of spring in March or April brings the return of migratory birds and the first flowers in gardens.  Vancouver famously heralds spring with the arrival of cherry blossoms and (sometimes) the end of steady rains.  In Whistler, as the last snow in the valley continues to melt, however, signs of spring’s late arrival take a rather different form: skunk cabbage and spring skiers, both of which have a relatively long documented history. 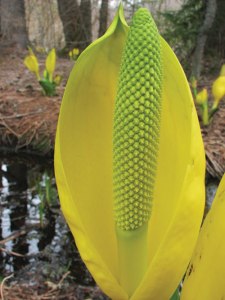 It’s not uncommon to spot a few early daffodils and crocuses around the valley if you’re looking for them (especially outside of Meadow Park Sports Centre, which may have something to do with nearby heat tracing), but it is hard to miss the bright yellow blooms and swampy smell of skunk cabbage that mean spring has truly arrived in Whistler.  In May of 1977 the Whistler Answer declared skunk cabbage, or Lysichiton americanus, to be the official flower of the Resort Municipality of Whistler, claiming that it “best exemplifies the spirit of this young community” and that “its bright yellow flower is as cheery a sign of spring as any Robin Redbreast, cherry blossom or halter top.”  Also known as swamp lantern, skunk cabbage can be found throughout Whistler; one needs only to walk down the Valley Trail or drive along the highway.

Just as easy to spot are the spring skiers and snowboarders heading up Blackcomb for the last few weeks of the season with light or no jackets or, on warmer days, in short and t-shirts.  Spring skiing has been popular on Whistler Mountain since its opening in the 1960s.  At breakfast with my own grandmother, she recalled a day of skiing back when the Roundhouse was still round when one female skier arrived inside the cafeteria in her bathing suit with her skis still strapped on her feet.  Though images of a similarly attired woman were used to advertise spring skiing on the cover of Garibaldi’s Whistler News in 1970, such outfits were not actively encouraged by the same publication’s spring skiing tips.  Instead they warned that “it only takes one fall on hard packed snow to cause painful cuts, scratches and bruises on legs and arms” and advised “lightweight stretch pants and wind shells or light sweaters.”  Garibaldi’s Whistler News also emphasized the importance of two other spring skiing tips that can still be applied today: sunscreen and sunglasses.

A skier demonstrates why shorts and t-shirts may not be the best option, no matter how warm it may be. Photo: George Benjamin collection.

Whether getting a few more days on the mountain or riding the trails in the valley, enjoy spring in Whistler while its lasts.  Summer will be here before we know it.