The content included in the Blackcomb Mountain Collection varies widely. There are, of course, a lot of images of people skiing and, in the later years, snowboarding. There are also many images that were created to promote Blackcomb Mountain and so show people (often hired models) happily wearing ski gear in the sun, sharing a meal at one of Blackcomb’s restaurants, or eating giant cookies outside in the snow. There are also images of mountain facilities, retail stores, and a lot of Blackcomb branded clothing.

Not all of the images, however, are quite so obviously stages and instead seem to be promoting Blackcomb Mountain simply by capturing what was happening on and around the mountain. These images include many events that were hosted on Blackcomb Mountain, such as Freestyle World Cups, Kids Kamp events, Can Am bike races, and the well-remembered celebrity Suitcase Races. There are also images of people paragliding with Parawest Paragliding, the company that Janet and Joris Moschard operated off of Blackcomb Mountain in the early 1990s, and street entertainers organized by the Whistler Resort Association drawing crowds both at the base of Blackcomb Mountain and throughout the Whistler Village.

Amongst all of these images, there are also a few series of images of Blackcomb staff and staff events from the early 1990s. These are the images to which we are hoping to add more information (specifically names and possibly job titles) at our next Naming Night at the Museum.

If you haven’t been to a Naming Night before, the format is pretty simply. At 6 pm on Thursday, September 22, we’ll be posting about 100 images around the museum that we need more information about, including the series of Blackcomb staff. Everyone is welcome to come help us fill in the blanks, whether you recognize a face, a place, or an event, by writing the information on a post-it and sticking it to the image (paper and pens will be provided). This information will then be added to the image’s entry in our database, making it much more likely that the image will be included when someone searches for a specific person, place or event in our database or online galleries. We’ve also had hundreds of names added to our images by people across the world since moving Names Night online in 2020, so, if you’re not able to make it the museum, we will also be posting the images on our Facebook page on Friday, September 23. Whether in person or virtually, we hope to see you there!

The suitcase race discussed in last week’s blog post was co-opted by the Pepsi Celebrity Ski Invitational in 1987. The organizer of this event, Bruce Portner, stated in the article Hundreds pull together for publicity event by Larry McCallum, that many celebrity events do not succeed which is why “the two and one half days will have to be packed with eye-catching, unusual activities to appeal both to the celebrities and the media”. Flinging yourself down a ski hill on top of a suitcase certainly fits into that category. CP Air sponsored the suitcase race and the Star dinner event raised $30,000 for helping to immunize children against polio.

Many stars attended this event including Richard Roundtree who played John Shaft in the Shaft movies, and TV series. He also made appearances on shows such as The Fresh Prince of Bel-Air and Heros. Olivia Barash known for her roles in Fame (1987), Out of the Blue (1979), and Patty Hearst (1988) also attended the events.

Richard Roundtree getting ready for the race. Photograph by Greg Griffith. Griffith Collection. 1988

The next year (1988), the Pepsi Celebrity Ski Invitational Act II took place in the middle of April. The Black Tie Ball promised “A full Hollywood-style variety show” with Dynasty’s own Emma Samms as host, and performances by Platinum Blonde and Mary Wilson of the Supremes.

The Pepsi Celebrity Act III took place on April 13th to the 16th, 1989. On April 13th, 1989 the Whistler Question published an article stating that the goal of this year’s Suitcase Race, which was sponsored by American Airlines, was for two teams of two racers to sit in a suitcase and “speed down the slope above the Solar Coaster quad chair.” The object was not only to be the first across the finish line but also to “make it down the slope without falling out or flipping over the plastic luggage case.” 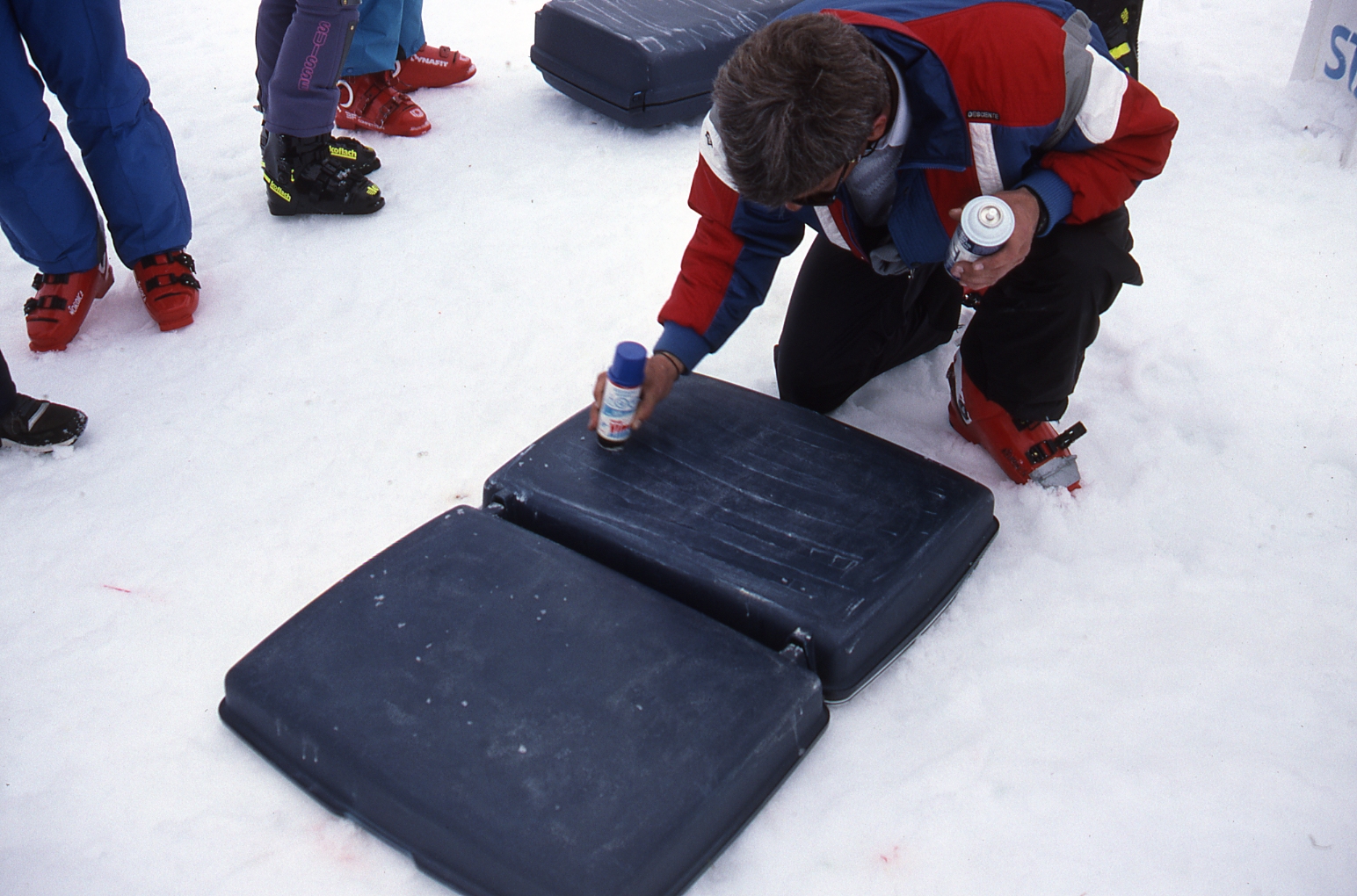 Emma Samms returned to Whistler for the Pepsi Celebrity Ski Invitational of 1989. The proceeds of the weekend were once again donated to the Starlight Foundation,  founded in 1982 by Samms and her cousin Peter Samuelson, which grants wishes to chronically ill children.

The 1989 event boasts stories of Tommy Lee of Motley Crue getting a Ski Esprit instructor to help find gloves that he dropped from the chairlift, as well as Lee nearly taking out the race shack at the bottom of the Orange race course on Whistler Mountain. Another story from the event describes Gil Gerard (who played Buck Rogers in the Buck Rogers TV show) accidentally stabbing Sean Vancour with his ski pole. 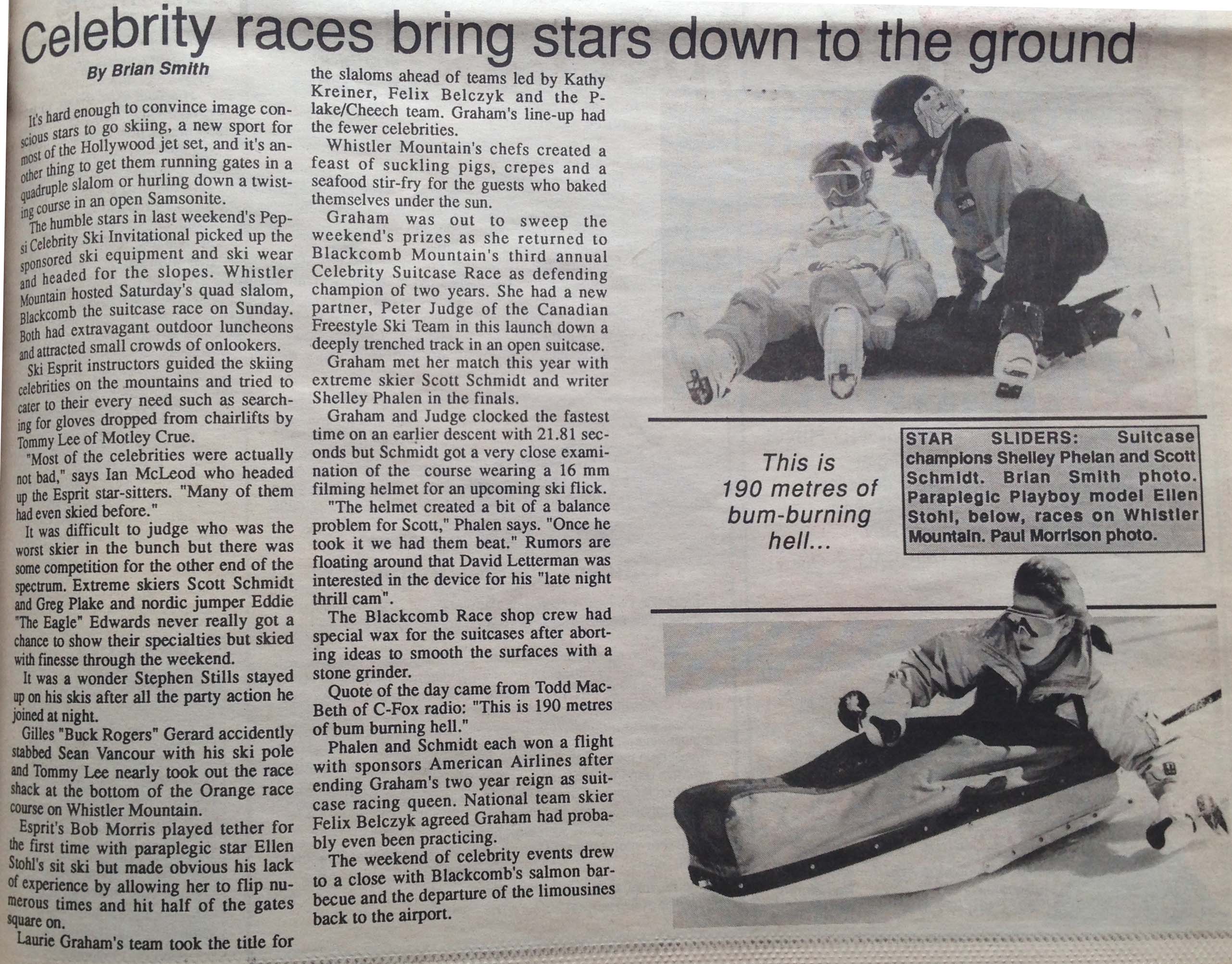 After Act III had concluded there was a lot of talk about the event not continuing. As far as I can find, from digging through the Whistler Question archive, there were no more Pepsi Celebrity Ski Invitational’s or suitcase races held on Blackcomb Mountain. 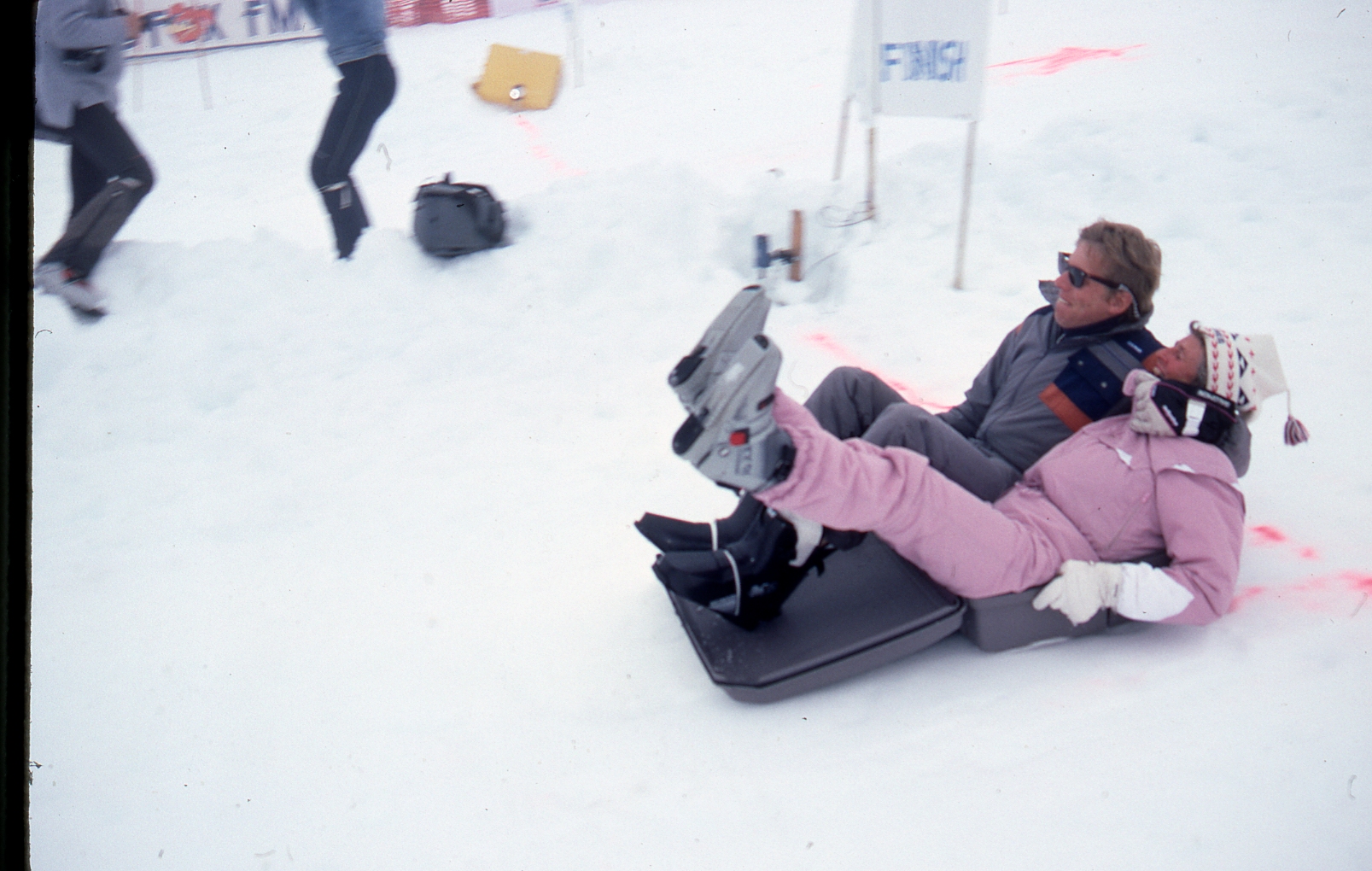 For those of us at the Museum who have not worked, or lived, in Whistler for long, it is always great when people who had lived around Alta Lake in the early days drop in and say hello. It is wonderful to get firsthand experiences of Whistler’s history and to take our eyes out of the archives. This is what happened last week when a couple came in to see if the Museum had a book they were looking for. Through our discussion they told me about a suitcase race that was held on Blackcomb Mountain in the 1980s. This peaked my interest, as anyone traveling down a ski hill in a suitcase sounds amazing. I went to the Whistler Library to dig through old copies of The Whistler Question to see what I could find. There was surprisingly little information to be found about what I assumed would be a hilarious event to bring athletics and non-athletics together.

It seems that the first one took place on March 10th, 1984 and was called the Samsonite Media Celebrity Race. The event description in the Whistler Question went as following:

To be held on Blackcomb Mountain, possibly the downhill of the decade ­– a definite “photo opportunity.” Celebrities and press alike compete on a treacherous two-part course. The course is a downhill designed for racers piloting the latest in Samsonite’s Nagahide bobsled. Only Samsonite could take this beating. Definitely a spectator’s event. Free admission, refreshments available.

My favorite part of this is that there are very little clues as to what is going to take place but that “Only Samsonite could take this beating.” On March 15th, 1984 there is a small mention of how the event went in The Whistler Question’s Notes from All Over section. Stating that the MC of the event, Greg Lee, did a great job announcing the race in both French and English and that Dennis Waddingham’s racing helmet was a good idea.

A year later, on March 14th, 1985, an article was published in The Whistler Question about the event now called the Chillers Suitcase Slalom.

Sliding down a mountain on pieces of metal and fiberglass is one thing. But how about doing that in a suitcase? For a slightly different downhill experience, the Chillers Suitcase Slalom on Blackcomb is the prefect solution. Organizers are calling it a soapbox derby on snow. The jury’s still out on what the competitors will call it. The suitcase slalom will take place on a specially prepared 100 m course on Chair 2 Sunday March 31 at 2 p.m. Teams of two with each participant sitting in one half of an open suitcase race head-to-head against another team. Blackcomb provides the suitcases. The race is designed for anyone working for a Whistler business…“It will be the best laugh of the spring,” say organizers.

In the April 4th 1986 The Sports Column by Mike Youds, Youds pokes fun at the National Ski team stating that the team “ought to bypass summer training camps and enlist team members in hotel and restaurant jobs to get them in shape.” He goes on to report that the teams in the hospitality trades performed much better than any profession or trade in the race. “Even the airline industry, with two of the Murray brothers on the team (no on could boast as much air time as these guys have) couldn’t catch up with the likes of the Creek House Canines and the Highland Highballs.”

This event was then co-opted by the Pepsi Celebrity Ski Invitational in 1987, which I will discuss in Part two of the Suitcase Race Blog next week.