You wouldn’t expect a pulp mill, a pop-rock band and 20th century settlers to have a lot in common, but in the Sea to Sky corridor you can find the unlikeliest of connections.

In 1909, the Conroy family moved west from Ontario and preempted 380 acres of land in the area around Brandywine Falls, including the falls themselves.  The area had previously been used as a rest stop for northbound mule drivers on their way to settlements and gold fields.  Charles Conroy, one of the Conroy sons, made a reputation working 30 to 60 string muletrains.

Brandywine Falls, now a provincial park, was once the Conroy family homestead and then a bustling resort. Photo: Whistler Mountain Collection

The Conroy family saw the area through the arrival of the PGE Railway and the construction of a supply road by BC Electric in the 1950s.  Before the highway was finished in the 1960s, Charlie Conroy sold the property to Ray Gallagher but remained close to Brandywine until his death in February 1972.

The Poppy Family was a Vancouver-based music group formed by Terry Jacks and Susan Pesklevits in the mid 1960s.  According to Garibaldi’s Whistler News, February 1968, the group got together “almost by chance.”  Susan needed an accompanist for a performance in Hope and asked Terry.  The Hope show went well and the two decided to form their own group and brought in lead guitarist Craig McCaw to complete the group.  In 1967 Terry and Susan married and through 1968 the Poppy Family performed regularly at Whistler Mountain.  Satwant Singh later joined the group on tablas and they put out their first album, Which Way You Goin’ Billy? in 1969. 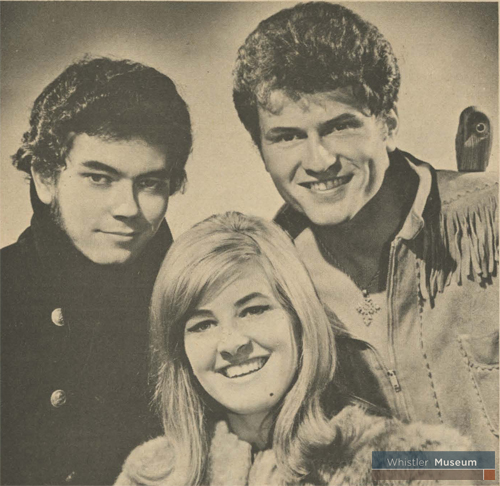 The Poppy Family as they appeared in 1968 when featured in Garibaldi’s Whistler News.

Terry and Susan Jacks stayed regularly at the Brandywine Falls Resort.  This is presumably where they met Charlie “Whitewater” Conroy.  Despite an almost 60-year age difference, Terry and Charlie became close friends and fishing buddies.

Sixty years earlier, in 1912, the Woodfibre pulp mill opened a little south of Squamish on the western shore of the Howe Sound.  Accessible only by boat, the remote town site built around the mill housed workers and their families until the 1960s when they began commuting to work by ferry from nearby Squamish and Britannia Beach.  Woodfibre was one of the oldest pulp mills in British Columbia before it closed in 2006.

The Conroy family, the Poppy Family and Woodfibre have a surprising connection – a song, released in 1972 and only just over two minutes long, named “The Ballad of Woodfibre”.

Terry provided the music and the vocals were performed by 82-year-old Charlie.  “The Ballad of Woodfibre” was a comment on the pollution caused by the Woodfibre pulp mill and the smell that lingered along the Howe Sound from Lions Bay to Squamish.  The first verse encourages visitors to Woodfibre by claiming, “If you don’t mind the smell you can have a good time.”  The chorus begins “Woodfibre, Woodfibre, our little town/You’re turning the water all brown in Howe Sound,” and forecasts the mill’s closure due to the pollution of the water. (You can hear the recording of “The Ballad of Woodfibre” here)

This evening (Saturday, April 28) Julie Gallagher, whose parents Ray and Ruth Gallagher bought the land around Brandywine Falls from Charlie Conroy, will be at the museum for Growing Up at Brandywine Falls: From Resort to Provincial Park.  Doors open at 6 and the talk begins at 7.  Tickets are $10 or $5 for museum and Club Shred members.  Julie will also be hosting guided walks through Brandywine at noon both today and tomorrow (Sunday, April 29).  For more information check here.