Whistler has long had a connection the film industry in Canada, from the long-running Whistler Film Festival to film productions like the campy Ski School comedy films of the 1990s and countless Hallmark Christmas movies to the world-renowned action sports films by Anthill Films and Sherpas Cinema.

Whistler is also part of our nation’s earlier film history in that Canada’s first talking picture, or “talkie” – a film produced with synchronized sound, as opposed to the silent films that were prevalent prior to the 1930s – was based off a novel written by Alta Lake resident Alex Philip.

Alex Philip was one of Whistler’s most well known residents during the first part of the 20th century. In 1914, he and his wife Myrtle opened Rainbow lodge, Alta Lake’s first summer getaway, and were essential in bringing tourism to the valley.

Alex was also an author and went on to pen three novels while operating Rainbow Lodge. The first of three novels, The Crimson West, was published in 1925. This novel would be adapted into a film called The Crimson Paradise (or Fighting Playboy in the US) in 1933. Shot in Victoria and the surrounding area of Oak Bay and Cowichan Valley, this was Canada’s first talkie.

The screenplay for The Crimson Paradise was written by Arthur Hoerl, who later wrote the screenplay for Reefer Madness (1936), the now-infamous American propaganda film about the dangers of the consumption of marijuana.

The filmmakers hoped that The Crimson Paradise would help to position Victoria as “Hollywood North,” and also hoped to take advantage of new rules limiting the importation of foreign and Hollywood films into the UK. The producers believed that Canada, as part of the British Commonwealth, would not be subjected to the importation rule and could take advantage of a guaranteed audience by being labeled British instead of “foreign.” This turned out to be incorrect, much to the chagrin of the producers.

The Crimson Paradise premiered at the Capitol Theatre in Victoria on Thursday, December 14, 1933. Ivan Ackery, manager of the Capitol Theatre and good friend of Alex Philip, stated, “We only played The Crimson Paradise a week, as I recall, but we did sensational business… It was a real turkey. So lousy it was good. Everyone wanted to see the local people and local scenes.”

The premiere was a major event in Victoria, attracting a few Hollywood stars along with the Premier and Lieutenant Governor of BC. The film played in Victoria for a week before moving to Vancouver for another weeklong engagement. Despite its successful premiere, the film ended up being a major financial disaster and bankrupted one of the financial backers, Kathleen Dunsmuir. The film was estimated to cost between $50,000 and $60,000 (about $1 – 1.2 million when adjusted for inflation).

Alex Philip and Capitol Theatre operator Ivan Ackery remained good friends and would look back fondly on their mutual brush with the film industry. The Whistler Museum collection contains copies of all of Alex’s novels, which we hope to have digitized and available for public viewing in the near future. Sadly, The Crimson Paradise is considered a lost film, meaning that no known copies exist. 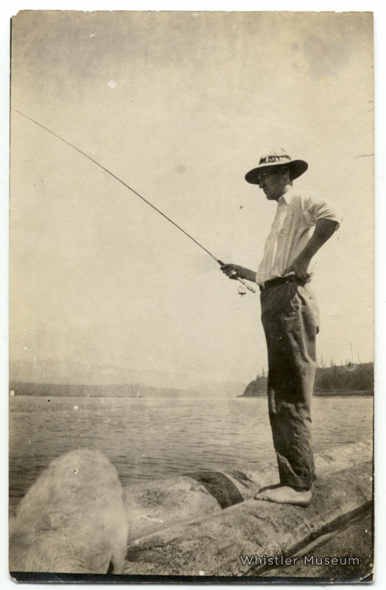 Alex Philip, one of Whistler’s pioneers and the co-proprietor of Rainbow Lodge, was apparently a man who had varied interests. Among these interests was a great passion for romance, and in particular, romantic novels. His first novel, The Crimson West (1925), was turned into a fairly successful film called ‘The Crimson Paradise”. He wrote three novels, the other two are titled The Painted Cliff (1927) and Whispering Leaves (1931). Because of Philip’s important place in Whistler’s history, I was curious to read his books. When I first looked them up online, I found Alex Philip described as a “literary embarrassment” by one reviewer. However, another described The Painted Cliff as “a really excellent yarn”. Leafing through the pages of any of these books, it becomes abundantly clear that Alex was a man of his time. Women are weak and in need of gallant men, racial stereotypes abound, and the heroes enjoy unrealistically favourable outcomes at the end of the books. 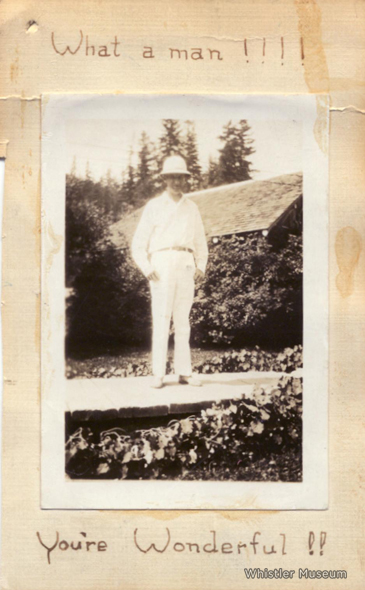 Alex Philip had some adoring fans!

For their racial stereotyping, misogyny, and clumsiness, they are perhaps not fine works to be put in the Canadian literary canon, but they do hold a certain charm, especially for people who have familiarity with the landscape around Whistler. These books provide a glimpse into the 1920’s idea of adventure and romanticism.

One of the charms of the books is the archaic expressions and language employed by the characters. Remarking on an acquaintance, one Painted Cliff character says, “An’ we crave his company like a fish craves a shoehorn”. As an expression of exasperation one character cries out, “Suffering cats!”

Alex Philip enjoyed being out in the great outdoors.

His books tell stories of men who are redeemed and renewed by their excursions into the wilderness. The Painted Cliff, for example, begins with a near death experience in the city, before the main character takes off into the wilderness with some companions. They have many adventures, and seem to become better men as a result of these events.

Perhaps most valuable in these books are Philip’s descriptions of the landscape; his passion and romanticism is clear in his extensive use of descriptive language. His descriptions convey a true passion for nature, and his belief that there was great value in leaving cities to explore the great outdoors. Several examples of these descriptions are reproduced below to give you an idea of Philip’s attachment to the Western Canadian landscape.

The day was waning. The sun blazed low through an ice-filled notch in the valley ramparts, the sides of the mountains darkened into purple shadows, while above the sky was resplendent with vivid orange hues.

The lake was a shimmer of coppery light; a little brook chuckled; a grouse at the edge of the woods eyed the tent; and then with a soft “prut-prut” glided to shelter. A goldfinch caroled its evening song from a swaying rosebush. Standing on long legs in the shallow water of the lake, a blue heron stood as motionless as if painted on a Japanese screen, watching and waiting to spear some unwary fish.

Peter thought of the desperate dirty cities, of the sooty air brooding above the buildings and dusty pavements. Surely it was difficult to keep one’s soul clean there. Here in the great outdoors it was easy. He felt he could stay in this valley forever. Here one could live with no great physical effort or mental strain, far from the harrowing influences of the conventional struggle for existence.

– All of the above are excerpts from The Painted Cliff.

Apparently Alex’s romanticism was popular with the ladies.