On Whistler and Blackcomb Mountains, names are often used to tell a story.  Even names that began as simple descriptions of a place have evolved over time to share a part of Whistler’s history (after all, there is nothing round about the Roundhouse these days).  Names of trails, lifts and structures on the mountains are recorded on trail maps, in operational lists and, most visibly, on the signs that direct skiers and snowboarders around Whistler and Blackcomb.

The trail names of the two mountains have hundreds of stories behind them, some hotly contested and some documented.  Because we’ve got names on our minds, we’re sharing the meaning behind a few here.

One of the best-known stories is likely the tale behind Burnt Stew, which actually occurred before Whistler Mountain even opened for skiing.  During the summer of 1958, museum founder Florence Petersen and friends Kelly Fairhurst and Don Gow were camping on Whistler and, forgetting to stir the dinner left cooking in an old billycan, the smell of burning stew began to waft through the air, setting up the moniker we still use to this day. 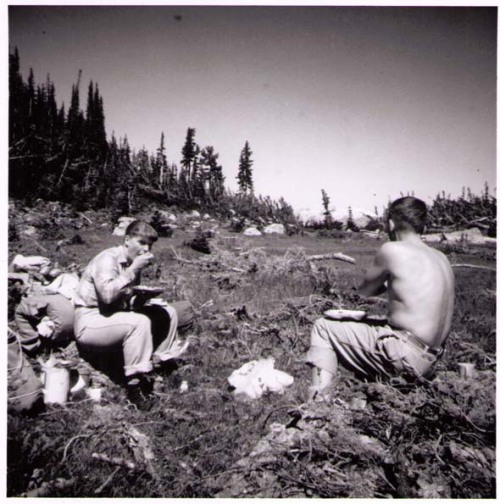 Other trails were named by or for people who loved to ski them.  Chunky’s Choice was the favourite run of Chunky Woodward, one of the founding directors of Garibaldi Lifts Ltd. and a member of the Vancouver department store Woodward family.  Over on Blackcomb, Xhiggy’s Meadow was named for Peter Xhignesse, one of the original ski patrollers on Blackcomb Mountain. 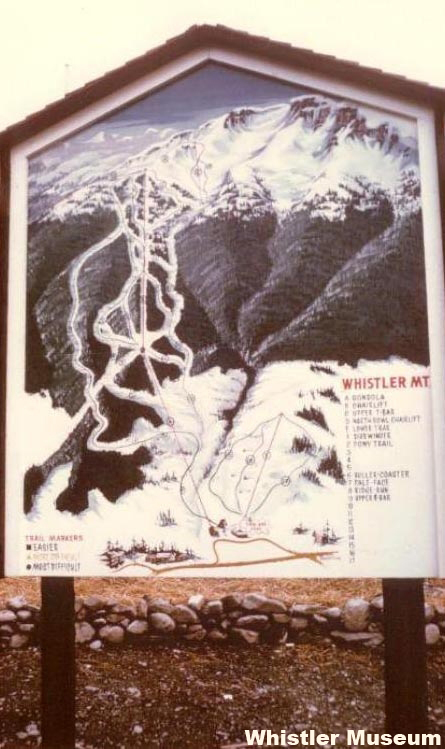 Many of the names on Blackcomb reference the valley’s forestry history, which was active into the 1970s.  A catskinner, for example, is a tractor driver, a cruiser is a logger who surveys standing timber for volume and a springboard is a board used to provide a place to stand when hand-felling large trees.

There are also names that describe something about the trail.  According to our sources, Boomer Bowl gets its name from the vibration that rattled windows in Alpine Meadows when the bowl was bombed by avalanche control.  Windows today may not rattle in quite the same way, but it is still noticeable in Alpine when avalanche control is active near Harmony.

While trail names don’t change frequently, the signs they are inscribed on are replaced every so often.  On Thursday, February 7, the museum and Whistler Blackcomb Foundation are offering the chance to own a piece of Whistler’s mountain history with the sale of over 250 unique trail signs taken off of Whistler and Blackcomb as a fundraiser for both organizations. 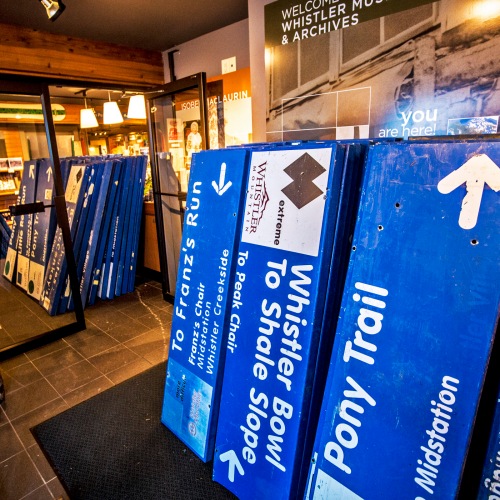 Some of the signs have quite literally taken over the Whistler Museum.

Whether you love the trail the name signifies or the significance behind the name (or you just really want to let people know when to lower their restraining device) chances are you’ll find a sign that reminds you of days spent on the mountains.

Signs will be available for purchase at whistlerblackcombfoundation.com from 10 am on February 7.  Signs can be picked up from the Whistler Museum during our opening hours on February 9, 10 & 14.

If you want to learn more about the stories behind trail names, take a look here and here.

Posted in Beyond Skiing, From the Archives, Museum Musings, News & Events, Whistler Blackcomb

Own a Piece of Mountain History 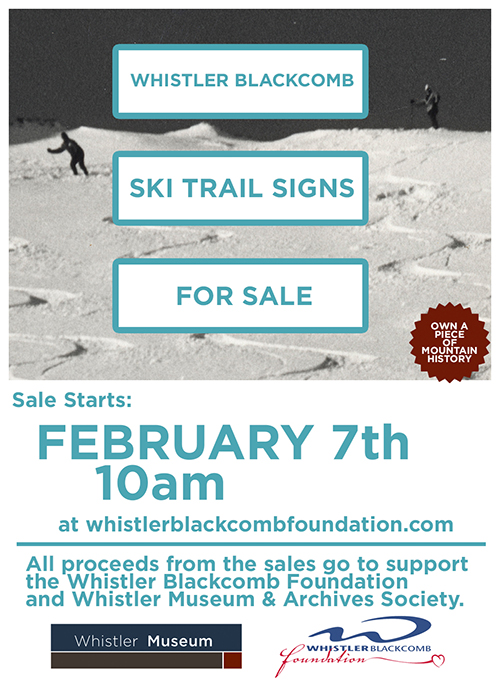 The Whistler Blackcomb Foundation and Whistler Museum & Archives Society are offering the chance to own a piece of Whistler’s mountain history this February with the sale of trail signs from both Whistler and Blackcomb Mountains.

Over 250 unique signs will be available for purchase online at whistlerblackcombfoundation.com Thursday, February 7 at 10 AM PST.  These signs previously directed skiers and boarders down their favourite runs and include a variety of trails, lifts and logos.  Whether you favoured Jimmy’s Joker or Pony Trail, there’s sure to be a sign to bring back memories of days spent in the snow.

Signs range from $20 to $250, depending upon condition.  Purchased signs will be available for pick up at the Whistler Museum February 9, 10 & 14 only.

The Whistler Blackcomb Foundation is dedicated to providing financial support to registered non-profit organizations whose activities provide benefit to residents of the Sea to Sky Corridor in the areas of health, human services, education, recreation, arts and culture and the environment with an emphasis on children, youth and family programs.

The Whistler Museum & Archives Society works to collect, preserve, document and interpret the natural and human history of mountain life – with an emphasis on Whistler – and to provide a forum in which to present an innovative range of exhibitions and education programs to enrich the lives of residents and guests.