This Week In Photos: December 13

The centre display of pottery at the Craft Fair. 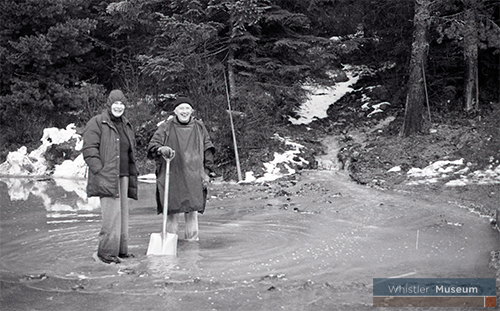 … while Bill Wallace attempts to clear a culvert on Archibald Way.

Dave Cathers proudly holds the “Citizen of the Year” plaque awarded to him during the Chamber of Commerce Dinner/Dance. 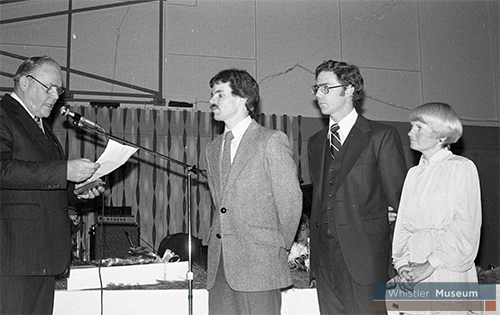 A smiling couple! Cathy & Bob Ainsworth at the dance. 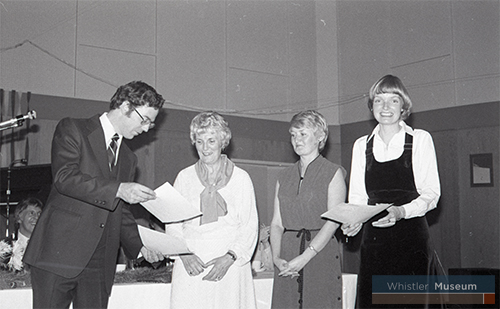 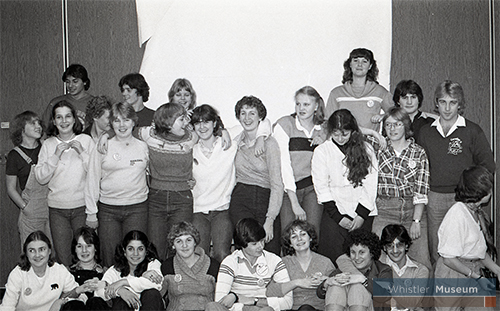 25 visiting Rotary students who came to Whistler for the weekend.

The first chair up Blackcomb – President Hugh Smythe loads the first skiers up the lift on December 4 while others wait to get up into the untracked snow. 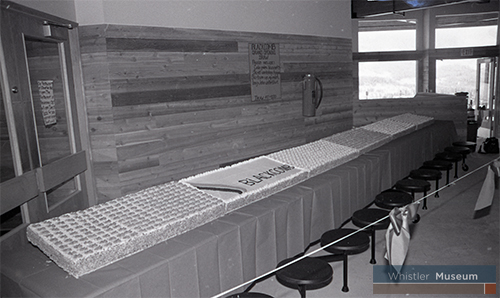 The 18 foot cake prepared by Gourmet for the opening of Blackcomb Mountain. 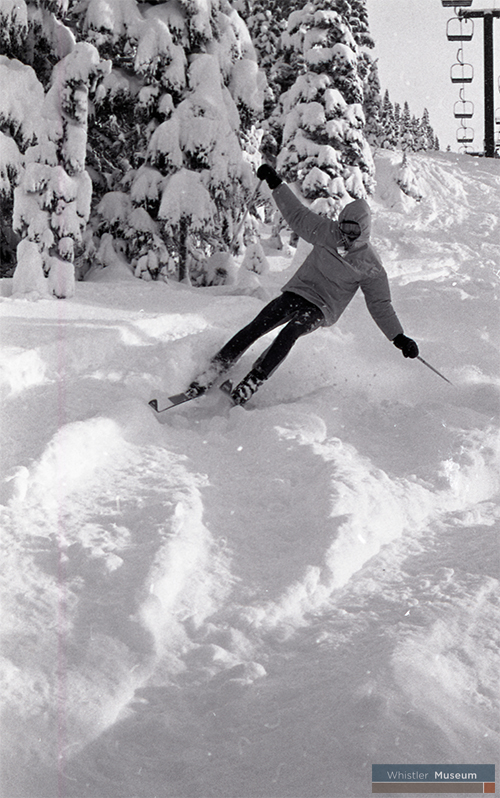 A powder hound enjoys the deep under Lift 4 on Blackcomb last week. 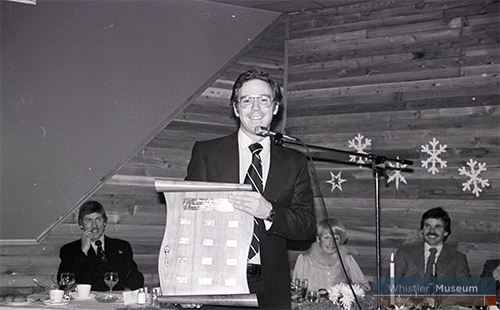 1980 Citizen of the Year, Chamber of Commerce President Drew Meredith.

Ron Hyde stands proudly in front of the sandblasted cedar sign he had created as project manager for the Whistler store.

Al Davis makes a toast with Francine Lessard at the MDC banquet.

Laurier LaPierre gets a hand buckling up his boots from Jim McConkey. LaPierre was in town taping a CKU special on beginning skiing. 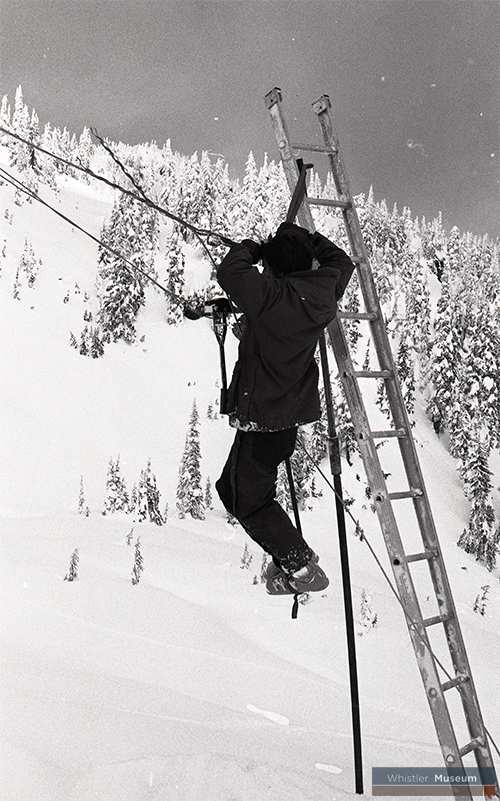 Hanging in Suspense. This workman tightens the cable for Whistler Cable TV’s new line running up the east face of Sproat. Photo by Peter Chrzanowski.

Citizen of the Year Trev Roote shows off his plaque to wife Susan outside his Whistler chalet.

Its owner Peter Skoros (left) under the new sign announcing his new restaurant in the Town Centre which will be opening next week.

Rosemary Dell gets a waving salute at her going away party Friday, December 10. Rosemary, the school bus driver, is leaving Whistler for wilder times at Kitwanga in northern BC. 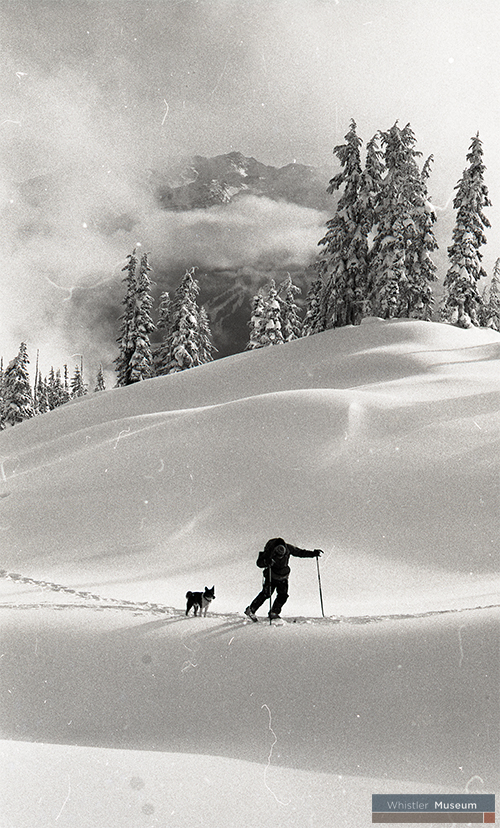 Whistler’s post office is bursting at the seams with loads of presents sent to locals from points all over.

Connie Kutyn tops off the latest decoration to be added to Village Square… a Christmas tree to help get Whistlerites in the spirit. 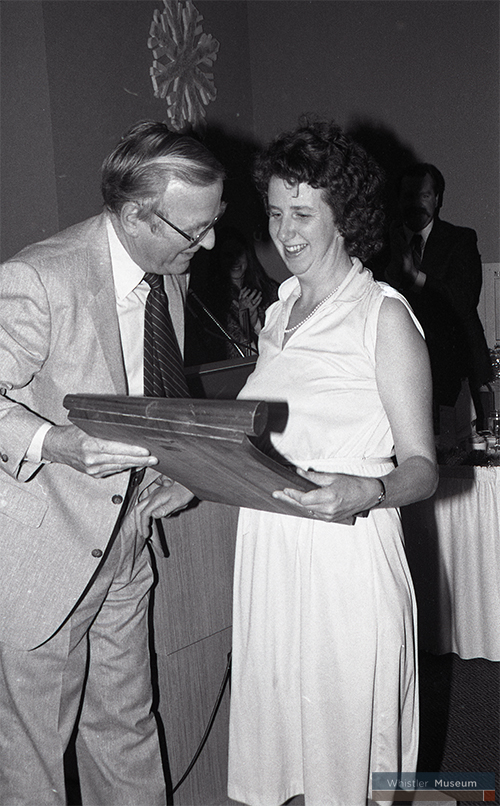 Viv Jennings accepts the Citizen of the Year Award from last year’s honoured residents Trev Roote at a Whistler Chamber of Commerce meeting held December 11 at the Delta Mountain Inn. 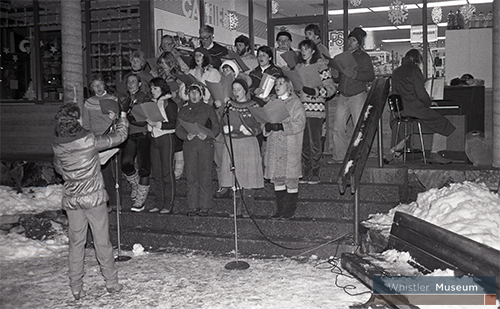 O sing ye of good cheer! As did the Whistler Choir in perfect harmony. The choir, led by Sue Worden, brought a lovely tone to Village Square Sunday in the true spirit of Christmas.

Molly Boyd receives the plaque honouring her as the Chamber of Commerce Citizen of the Year Saturday. Brian Walhovd, last year’s winner, announced to the crowd that Boyd was the 1984 winner for her involvement and extra commitment to the community.

The Chamber also announced its new slate of executives for 1985, which includes, from left to right, Roger Stacey and Nancy Trieber as vice-presidents and Dave Kirk as president. Mayor Terry Rodgers inducted the new executive, which resulted in laughter among the crowd when the three members attempted to read their chamber pledge in unison. 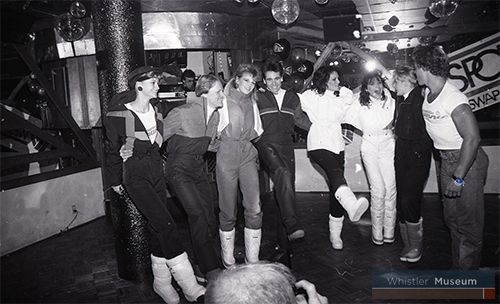 Club 10 was the host to West Coast Sports Mountain Shadows Saturday night, a fashion show featuring more than 29 different outfits all available at the ski outlet. All the models got together for one final display wearing moon boots by Diadora. 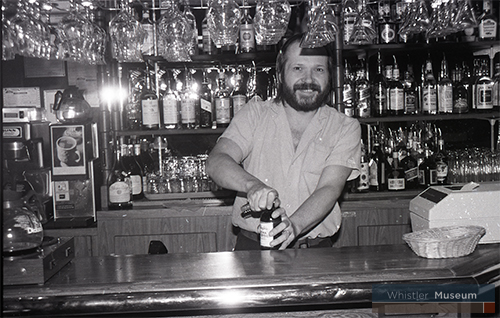 Pierre Couture opens a bottle of O’Keefe High Test in the Brass Rail, which boasts the most brass of any bar in Whistler.

Bartender Michael Branlon pours another pint of draft in the Longhorn, which has recently undergone substantial renovations.

Mischa Redmond shows some of the money he’s collected on his door-to-door African famine relief campaign.

This Week In Photos: November 29

One of the many new international symbol signs at Garibaldi Lifts.

The pillared form of package no. 2 rises at the Town Centre looking like a southern mansion.

A study in concentration – Trev Roote carves out house number signs at the Fall Fair.

The new first aid room in the old garage building at the lift base.

New signs for winter parking regulations were revealed this week. 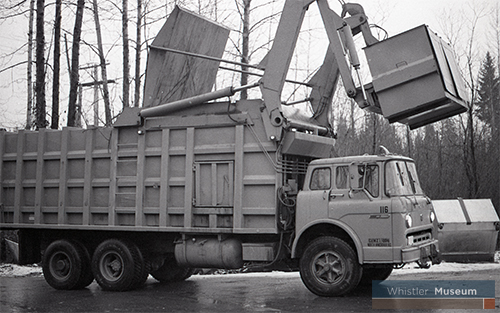 One of Whistler Disposal’s new front-loading garbage compactor trucks at work at the Mons site. 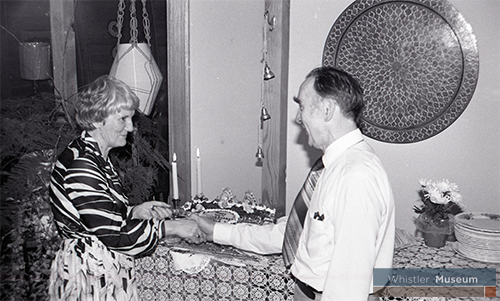 The products of the Mountain Cake Bake – part of the annual Fall Fair.

The snow arrives – an early scene in Alpine Meadows. 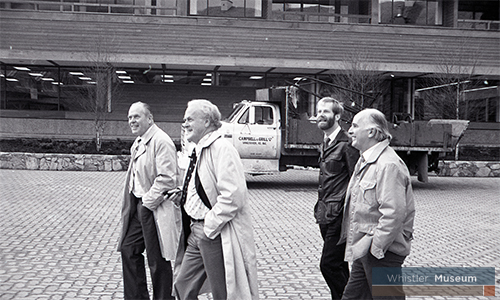 The proposed course for the 1982 World Cup was discussed at the latest meeting.

Pottery of all kinds was for sale at the Fall Fair over the last weekend.

Eager skiers head up for the fresh snow on Blackcomb…

… while skis pile up at the base. 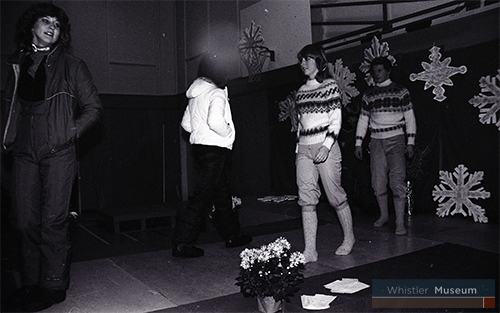 The latest winter fashions were on show in the Myrtle Philip School gym. 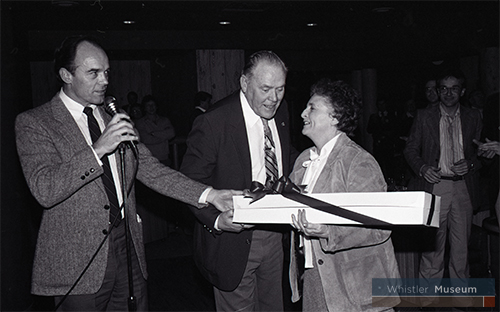 A dozen of the finest roses is presented to Kay Carleton, the woman behind the man during Pat Carleton’s seven-year term as Whistler’s mayor. One of the municipality’s first aldermen, Garry Watson, presented the gift to Mrs. Carleton during a surprise party held at the Delta Mountain Inn November 29 for the retiring mayor.

Ahoy there mate! November 27 was moving day for the sailboat being built by Cress Walker and Paul Clark in Alpine Meadows. Her maiden voyage took her to a new berth in Whistler’s Industrial Park.

Diane Smith (left) and Karen Benoit smile from their ticket wickets where they offer new two-mountain passes for $20/day. Youth can ski both mountains for $15/day and children for $5. These tickets are also available in two, three and five-day packages.

Superset for a super skier. Blackcomb’s Hugh Smythe sits in ‘the chair’ at the Downhill Shop while skitodics expert John Colpitts fits him out with a pair of Superset footbeds.

Whistler’s newest citizens join their moms for a well-baby clinic with Public Health Nurse Marilyn McIvor. From left to right in the front row are Brock Crofton and mom Yvonne, Jaclyn and Suzi McCance, Andrew and Lee Bennett and Alexandra and Donna Liakakos. Behind are Robin and Tamsin Miller, Marilyn McIvor and Trevor and Jean Dally.

What’s new in ski wear this season? Whistlerites got a chance to find out November 26 at the Winter What to Wear fashion show,held at Delta Mountain Inn. Above Andrea Maw and Nigel Woods – a dazzling duo – show off the latest in winter wear. 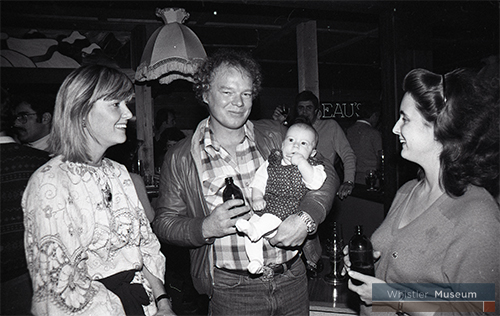 Trev Roote, chairman of the Advisory Parks and Recreation Commission, became Whistler’s fifth Freeman Monday, in recognition of his five years at the helm of municipal parks development – as a volunteer. Roote, 55, is a West Vancouver businessman, but spent considerable time here first of all finding out what recreation needs are and then, in 1981, gaining referendum approval of $2 million parks spending. 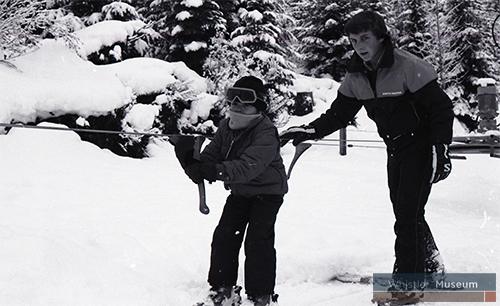 Whistler Mountain lift attendant Heather Watson loads ’em on Sunday at the Olive Chair. About 13,000 people skied the mountain on the first big weekend of the ski season.

The owner of the car municipal works foreman Gord Voncina unearthed on Mountainview Drive Monday learned an important lesson: don’t park on the road allowance, and doubly don’t let your car get buried in snow. A grader using back banks Monday morning discovered the car by accident, and it appeared some other driver had already smacked the car. 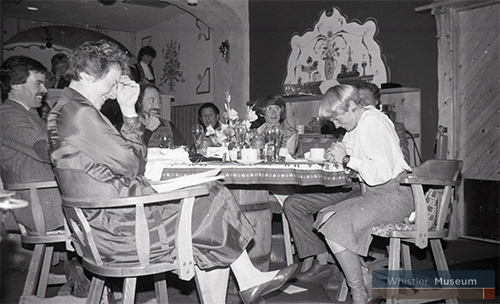 Wednesday marked a long evening at the Black Forest of roasting and toasting Jenny and Nello Busdon – more fondly known as Nelly and Jello. Representatives from virtually every community group paid tribute to the 17 years of service and dedication the Busdons have contributed to the valley. They leave this week with their children Nicholas and Melanie for Sun Valley.

Remember the huge exposed boulder near the front entrance of The Highland Lodge? Well, now it forms one of the walls inside the entrance way following a $500,000 facelift of the oldest continuously operated lodge in Whistler. 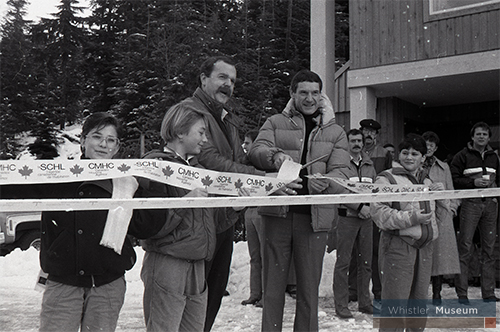 In one of his last official duties as mayor, Mark Angus cuts the ribbon to officially open the Whistler Valley Housing Society Project at the gondola Saturday. He is flanked by John Nicholls, Vancouver branch manager for Central Mortgage and Housing Corporation, and the three ribbon holders: Lisa Koby, Stephanie Simpson and Michele Zinsli. A reception followed in The Keg.

Management consultant David Golinsky spoke last week to Blackcomb Skiing Enterprises’ 120 employees with an eye to upgrading their skills in dealing with customers. Golinsky’s main theme is that employers and employees have to work as a team. He said there are certain basic guidelines for dealing with customers, but at the same time not all tourism programs offer skills needed for specific industries, such as skiing, and part of his purpose is to offer seminars to fit that need. Whistler Mountain has also introduced a similar program for its employees.