How the VOC Built Its Club Cabin

In the mid-1960s the UBC Varsity Outdoor Club (VOC) was looking for a place to build a new Club Cabin as the Parks Board was opposed to privately owned cabins operating on Mount Seymour.  The Club set its sights on the newly developing outdoor recreation area, Whistler.  They saw the opportunity as a chance to further the club’s mandate by providing members with new mountaineering, hiking and skiing opportunities.

According to Karl Ricker there was no shortage of energetic youth willing to lend a hand.  Whenever there were more workers than could be put to task, which was fairly frequent, he recalls, they would head out on hikes or even on trail-building excursions.  It was during these outings that the old Singing Pass trail received major upgrades and the trail to Cheakamus Lake was built.

The VOC used their own funds and labour, including the services of architect Byron Olson, to build the new Cabin.  The construction of the Cabin took two years from 1965 to 1967.  The Cabin was an instant hit for VOC members and other budget conscious skiers. 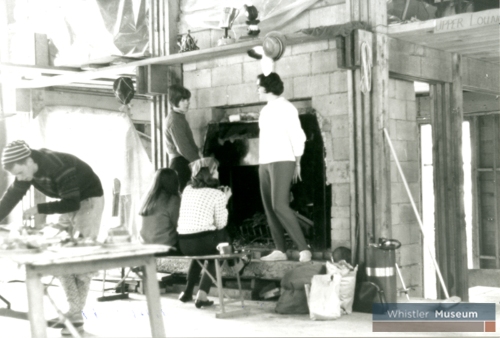 The construction of the VOC Cabin involved many of the club members. Photo: Leveson-Gower Collection

By the early 1970s the VOC was struggling to keep up with the increasing operating and upkeep costs and an internal debate began with the Club on letting go of the Cabin.  Some members wanted to build smaller cabins like the Sphinx (later renamed Burton, after Roland Burton who was instrumental in its construction) Hut in Garibaldi Provincial Park.  Others wanted to create a sub-section of the Club that focused on downhill skiing that would takeover operating the Cabin but still keeping it as a Club asset.

To further complicate matters, the UBC Alma Mater Society claimed ownership of the Cabin because the Club had used the AMS, in name only, to acquire the land for the Cabin.  The VOC attempted to obtain $30,000 for the construction costs and efforts made to to build new huts and relinquish ownership to the AMS and ultimately the UBC Ski Club.  The Club battled for five years until a student referendum passed in their favour in 1980.

The VOC Cabin even made it into Ski Trails, a Vancouver based publication all about skiing in the 1960s and 70s.

With the money received from the AMS, the VOC built two Gothic arch huts.  The first hut was built on Mount Brew, located 40km south of Whistler, and the second hut, the Julian Harrison Memorial Hut, was built near Overseer Mountain, north of Pemberton.  Stay tuned in the coming weeks for stories related to the construction and use of these two Gothic arch huts.