The Rainbow Ski Hill in 1980. Today this slope is the sight of Whistler’s Rainbow neighbourhood. Photo: Whistler Question

Yesterday (Friday, January 26) we opened our 2018 Speaker Series season with an evening dedicated to the Rainbow Ski Village, presented by Tom Jarvis, John Lee and Tommy Thompson.  The three told stories of Rainbow from three different perspectives: the owner trying to make the small ski hill a going concern, the former liftee in his first kitchen job, and the teenage ski jumper who got his start jumping on the BC circuit.  We’d like to thank all of our speakers as well as everyone who came out!

As we’ve been preparing for this event over the past few months we’ve gotten the chance to talk to some of the people, like our speakers, who worked, skied, owned and jumped at the Rainbow Ski Village, as well as Beau’s Restaurant, and have been gathering their stories.

Recently the museum was fortunate to speak with Andy Clausen, whose family managed the Rainbow Ski Village when it first opened and whose memories include not just Rainbow but also life in the Whistler valley in the 1960s and 70s.  Along with an article from the fall 1970 edition of Garibaldi’s Whistler News, Andy’s memories five us a much clearer picture of the early years of the Rainbow Ski Area.

The sign for Beau’s Restaurant. After the ski hill closed the restaurant continued to be a popular gathering place. Photo: Whistler Question

Andy’s stepfather, Vic Christiansen, worked for Jim McConkey at Whistler Mountain and had an impressive reputation as a skier.  In the late 1960s Vic was approached by Norm Paterson of Capilano Highlands Ltd. to operate a small ski area at Rainbow.

The Rainbow Ski Area first opened in the winter of 1969/70 with one 400-foot tow lift servicing a beginners’ slope.  After that first winter Capilano Highlands added a new 1,200-foot towrope and cleared four beginner/practice slopes leading off the lifts.  They also began construction of a day lodge and a parking area.

In the 1970s many people had their first skiing experience on Rainbow before moving onto the bigger Whistler Mountain. Photo: Cliff Jennings

In 1970 Rainbow opened five days a week (Wednesday – Sunday) under the management of Vic and his family.  Night skiing and reasonable rates (an adult pass for day and evening was $3, a child’s was $1.50) made Rainbow a popular place to learn to ski.

Over the next few years another towrope was added and the Rainbow Mountain Ski Club was formed.  Vic and Andy built Whistler’s first ski jump and Rainbow became a stop on the BC ski jump circuit.  The café was a popular stop for coffee and before he became Whistler’s first mayor Pat Carleton, a Nabob rep, could be found there frequently.

The Rainbow Ski Jump was a 30-40 metre Nordic ski jump and hosted competitions as part of a BC circuit. Photo: Clausen Collection

Being able to draw from both personal recollections and published articles helps to create a more colourful and complete picture of any given time and place.  Memories provide detail and a personal experience while publications, such as Garibaldi’s Whistler News, often record specific dates, names and even lift rates that an individual may not recall.  We are lucky to be able to refer to Whistler’s many publications, including Whistler News, the Alta Lake Echo and The Whistler Answer, when looking for information about this area’s past. 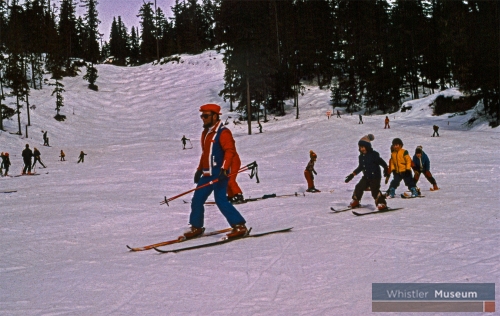 For the past 41 The Whistler Question has provided a record of life in and around Whistler, chronicling a rapidly changing community and growing mountain resort.  From covering the opening of Blackcomb Mountain on its front page in 1980 to announcing the marriage of Bob Daniels and Kashi Richardson in “Notes From All” in 1985, The Question has been an important source of local news in our town.

This past week we wrote our last article for The Question as it published its last edition on January 23 (Museum Musings will be appearing in the Pique beginning next week).  We would like to thank The Question for providing the Whistler Museum with a space to share Whistler’s stories, as well as an archive from to gather them.