There are few natural phenomena as universally adored as waterfalls. From the sublime power of Niagara Falls to the delicate cascading ribbons of Yosemite or even a secluded cascade in the forest, waterfalls are some of the most magnetic destinations on Earth

Surrounded by the steep, rain-drenched Coast Mountains, Whistler and the Sea-to-Sky region is a veritable waterfall watcher’s paradise. Ever since the early pioneer days, locals and visitors have been drawn to the powerful spray and serene flow of the many cataracts to be discovered.

Shannon Falls are arguably the most dramatic and most accessible in the region. Here Alex Philip and friend pay a rather formal visit, circa 1915.

Based on our photo archives, it is clear that Myrtle Philip of Rainbow Lodge fame was especially drawn to waterfalls. There are dozens of such  images in her collection, and they were one of her favourite attractions when guiding lodge guests through the surrounding forest.

Some of the waterfalls in these photographs we know quite well, while others remain a mystery. Perhaps some of Whistler’s many waterfall enthusiasts can help us identify them?

On the reverse of this photo print Myrtle wrote “This could be made a nice picnic spot for hikers or riders from Rainbow as it is a beautiful waterfall and to make a pony trail would mean very little work from Pemberton trail below mile 43 post [of the PGE Railway]. Wedgemount Creek Falls.”

In a recorded interview, Myrtle noted that this photo was “taken when we just began going up there about 1924.” It became a favourite destination for lodge guests on short day hikes from the lodge. Today, 19 Mile Creek runs right through the Alpine Meadows neighbourhood.

These are identified as “Rainbow Falls” but it is unclear if they are half of the twin Rainbow Falls that can be seen up close from a short spur trail, low down on the Rainbow Lake trail.

This steep cascade in heavy flood is reminiscent of the several creeks that can be seen during the middle section of the Rainbow Lake trail. Any guesses?

Residents of and visitors to the Cheakamus Crossing neighbourhood should be able to recognize these falls, which provide a stunning winter backdrop for Tweed, the Jardine family’s dog, circa 1930. 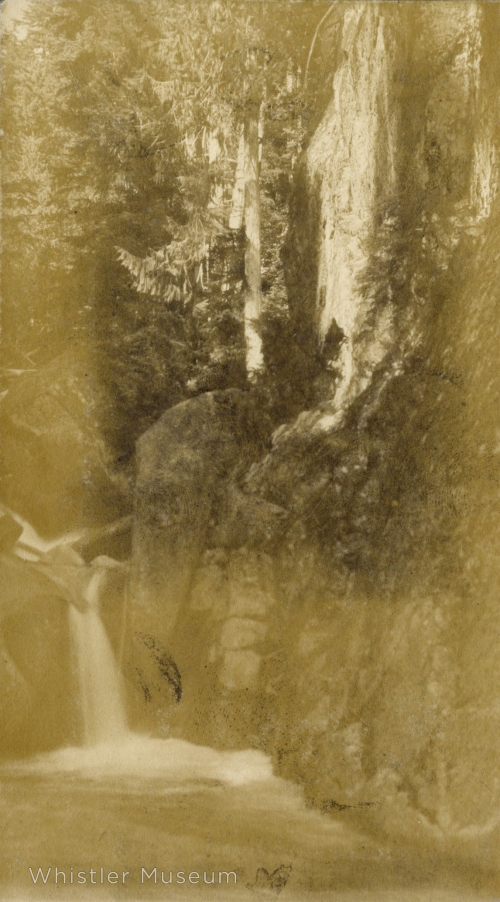 Most likely somewhere in the Green River canyon. 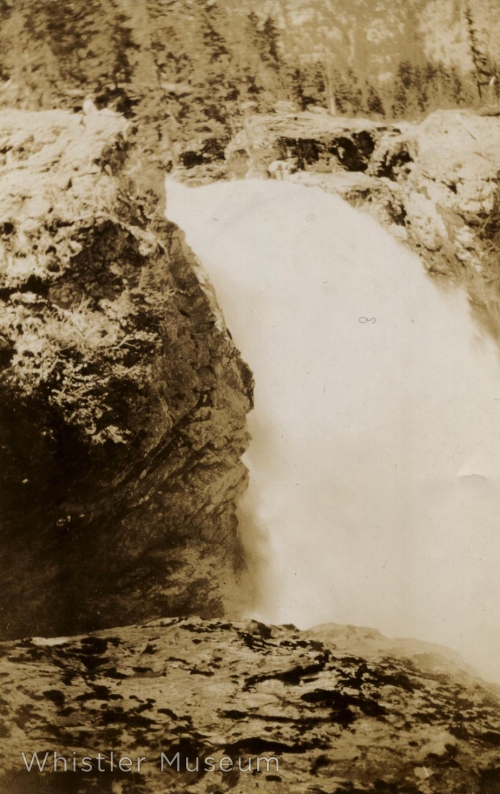 Inscription on the back: “Green River Falls 1918-19.” Taken by Myrtle Philip.

Another unidentified gem, shot by Myrtle.

What are your favourites?