With the successful completion of the Himmelsbach Hut in 1968, the British Columbia Mountaineering Club (BCMC) began looking for another location to build a Gothic arch hut near Whistler.  They already had a couple of ideas for their next location; one was near Mt. Trorrey along the Spearhead Traverse, the other was an alpine meadow on Mount Brew.  The BCMC decided to ask the mountaineering community for suggestions and advertised through a mountaineering paper and a few leaflets.

Werner Himmelsbach recalled, “So this logger, he contacted me and said, ‘I hiked up the peak beside Wedge Mountain and I saw a nice lake don below,’ so I thought that would be a place.”

Werner, along with three other BCMC members, decided to hike up Wedge in hopes of finding the lake the logger mentioned.  “It took us five and a half hours to get up there because we got lost in there because it was bush.”

This exploration of Wedge also involved finding a way across the river as there was no bridge access.  “Wedgemount Lake… was beautiful and when you come over the rise… there is this lake, turquoise colour and the glacier right into the lake,” Werner reminisced.

The idyllic Wedgemount Hut, with Wedge Mountain looming above left.  The glacier has noticeably receded as Werner remembers the glacier coming right into the lake.   Photo: Jeff Slack

The BCMC held a meeting to decide the new location and the vote was decidedly in favour of building the hut near Wedgemount Lake.  At Mount Brew, as mentioned in a previous article in The Whistler Question, the UBC Varsity Outdoor Club would later struggle with their own Gothic arch huts in the 1980s and the Spearhead Traverse would be revisited in the future by the BCMC.

The BCMC was granted building permission by BC Parks on October 9, 1970 and quickly organized a work party to construct the hut over the Thanksgiving weekend.  Werner was away on a trip to the Kootenays, so “master-builder” Manfred was in charge of putting the hut together.  The majority of the hut was built on the Saturday and the finishing touches and aluminum siding were added on Sunday.  The outhouse was built on the Monday but no trench was dug because the snow had already started to fall. 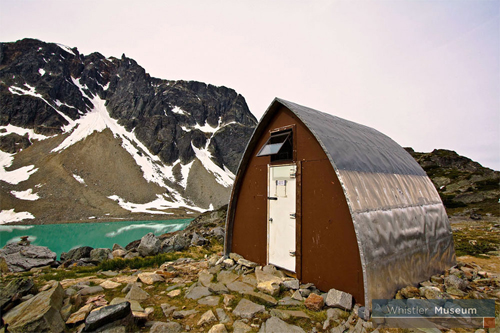 Brian Wood, a BCMC member and former President of the Federation of Mountain Clubs of British Columbia, recalled the BCMC assembled a work crew to go back to Wedgemount Lake to complete the construction of the hut in 1971.  When the crew arrived wind and snow creep had pushed the hut off of its foundations.  The crew used fallen logs to help maneuver the hut back into place and attached a couple of guy wires to help keep the hut on its foundations.  The crew dug the pit for the outhouse and the hut was ready to officially open that summer.

The Wedgemount Lake Hut remains a popular destination for hikers, rock-climbers and ski mountaineers to this day.  Because the hut only accommodates eight people. BC Parks has build camping spots and a bear cache nearby.  Reservations are required to camp or use the hut year-round.  If you’re interested in heading out, visit the BC Parks website for more details.

On this blog we try to highlight many of the unique characters in Whistler’s history. Being a mountain community, however, many of the local mountains are arguably as familiar as any person.  In the past we’ve set the spotlight on Fissile Mountain; today we shift slightly northwards to Wedge Mountain.

Wedge is an iconic local peak first and foremost because at 2895 m (9497 ft) it’s the tallest peak around. In fact, it’s summit is the highest point in Garibaldi Provincial Park (not Mount Garibaldi, as is commonly assumed), and all of the southern Coast Mountains. To find a higher peak you need to go the remote Mount Dalgleish, 100km to the north west, or to Mount Baker, across the border in Washington State.

Wedge Mountain (at right, above the cabin) is visible from just about anywhere in the valley, Rainbow Lodge and the entire westside have an especially clear view. The mountain’s wedge-like shape is quite evident from this angle.

The origin of the name Wedge Mountain is uncertain, although it presumably describes it’s triangular, wedge-like shape as seen from the Whistler Valley. The name is probably local in origin (like Whistler Mountain), as this name was already in use when Vancouver mountaineers Neal Carter and Charles Townsend made the first recorded ascent of the peak in 1923. When Garibaldi Provincial Park expanded in the late 1920s, a suggestion was made to rename the peak “Mount Vancouver,” but for whatever reason it never stuck.

Speaking of Carter & Townsend, we have already written about their two-week exploratory mountaineering trip to the region in 1923 which included the first ascent of Wedge (blog article here, full photo gallery here, and a virtual video recreation of their climb, using their own written account here), but needless to say, it was a dream trip.

The view south from just below the summit of Wedge,  towards our familiar W-B backcountry. Charles Townsend, photograph by Neal Carter.

Today, most people know Wedge because of the notorious Wedgemount hiking trail, arguably one of the toughest and steepest around. The trail leads up above treeline to Wedgemount Lake and the Wedgemount Hut, built by the BC Mountaineering Club in 1970 under the guidance of long-time local outdoorsman, environmentalist and community icon Don MacLaurin. The hut is of the same gothic arch design as the Himmelsbach Hut at Russet Lake, and many other backcountry huts in the region.

The idyllic Wedgemount Hut and Wedgemount Lake, with Wedge Mountain looming in the distance, right above. Jeff Slack Photo.

This is as far as most people make it, and that’s more than enough. Summiting Wedge is a far more challenging ordeal, requiring proper ice and rock gear and the skills to use them, but the standard North Arete route is considered one of the classic mountaineering routes of the Coast Mountains. There are also a number of popular steep skiing lines on the mountain, the most popular being the massive NW couloir visible from Highway 99 at the north end of town. 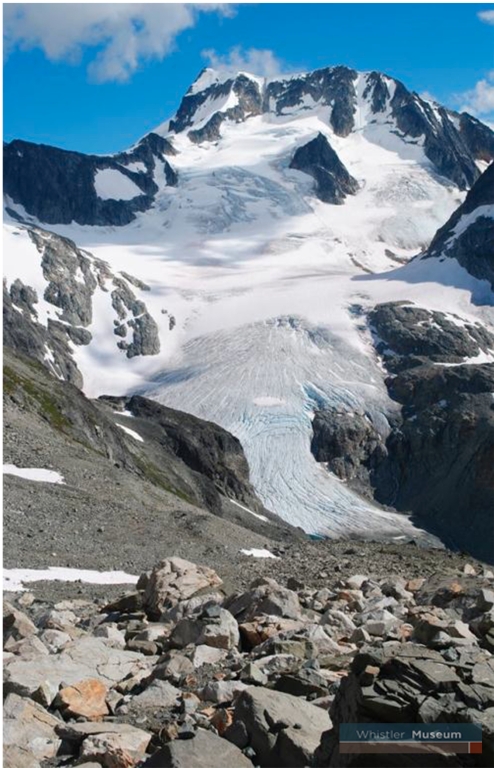 Few places in our region feel as “big” as the high alpine area around Wedge Mountain, but it is just one of many peaks that make our mountainous milieu special. What mountain would you like to see profiled in a future Whistorical post?