We are incredibly lucky at the museum to have stories from a myriad of different people who lived, worked or visited the valley over the past 100 years.  Most of the narratives from the era of Alta Lake tend to belong in one of two categories: summer resort life or logging and railroad work.  The same names are often mentioned in both, as would be expected in such a small community, but very few people really lived in both categories.

One exception is Verner Lundstrom.  In the late 1920s, at the age of 18, Verner left Sweden to join his brother Charlie at Alta Lake.  Charlie had arrived in 1927 and made his living as a logger and pole cutter, finding the tall, straight cedars that could be used as telephone poles.  The brothers lived in a cabin close tot he railway and near Fitzsimmons Creek, about a mile away from Lost Lake.  Together they logged cedar poles around the northeast area of Alta Lake. 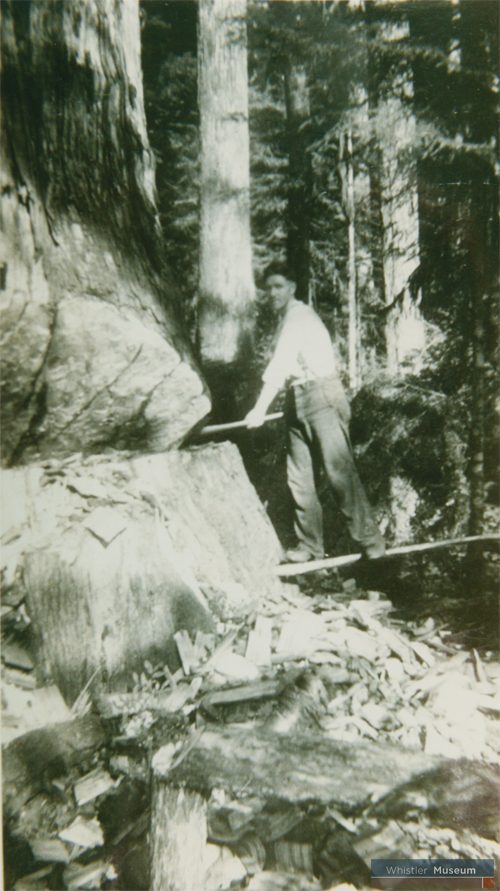 As Verner recalled in an oral history done in 1992, all of their work was done by hand.  With no power saw, trees were usually felled using a two-person saw.  The brothers used horses to help move the poles to the eastern shore of the lake by what Verner described as “skid roads”.  From there the poles were floated across Alta Lake to the railway station at the south end and loaded onto flatcars.

Verner and Charlie worked together for 8 to 10 years before Charlie moved on.  During that time there were various logging operations within the area and Verner knew many of the people we’ve written about before, including the Jardine-Neiland family, the Barrs, Denis DeBeck, B.C. Keeley, the Gebharts and the Woods family. 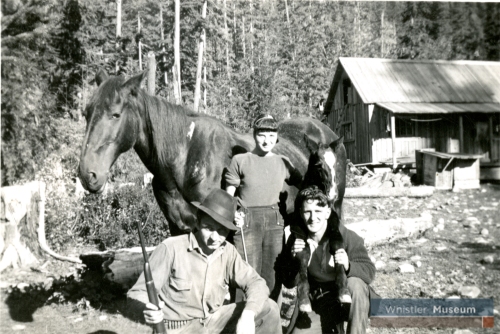 Life in Alta Lake wasn’t all work – here Alf Gebhart poses with Ben Dyke and an unknown woman in front of his house at Parkhurst. Photo: Debeck Collection.

In his first few years at Alta Lake, Verner also worked at Rainbow Lodge as a seasonal handyman and experienced life centred on summer tourism as well.  Verner recalled that, at the time, Rainbow Lodge would have up to 120 guests and he and some others spent a lot of time swimming during the day and dancing at night.  For Verner, who enjoyed swimming and hiking, his job at Rainbow Lodge sounds ideal. 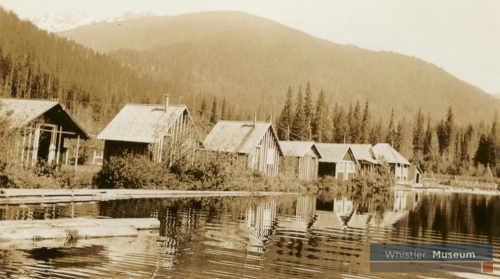 With the mountains and lake nearby, working at Rainbow Lodge was ideal in the summers.  Photo: Philip Collection.

When Verner wasn’t working at Rainbow Lodge or cutting poles with Charlie, he and his brother would often head up the surround mountains.  Verner thinks they must have gone up Whistler Mountain “hundreds of times,” either to hunt or “just to walk up to the lake.”  The lake in questions, Cheakamus Lake, had an old cabin that had been used by trappers and many weekends Verner would hike up, with or without Charlie.  Though Verner didn’t recall hiking up Blackcomb or Wedge, he did remember time spent hiking up Sproat and Red Mountain, known today as Fissile.

Verner stayed in the area even after Charlie had moved on.  In 1942, when he married Lauretta Arnold, Verner was living further up the rail line at Mile 43 between Alta Lake and Pemberton.  The couple then moved up to Mile 48 where Vern did the logging for the sawmill of John Brunzen and Denis DeBeck.

After their first child, Verner and Laurette moved to Birken, then later to Pemberton where their daughters could attend school.  In 1950 the family left the Sea to Sky and moved to Chilliwack where Verner continued to work in logging camps.  Even after he retired, Verner continued to fell trees for his friends until the age of 85.

Like Verner’s story, each oral history, letter or memoir in our collection provides a unique perspective on life in the valley.  Having access to so many different memories allows us to form a more complete picture of Whistler’s past.  Come visit us at the museum if you’re interested in adding your own perspective to the mix.

Posted in Beyond Skiing, From the Archives, Museum Musings, Pioneers, Recreation