At this year’s Icon Gone we experimented with a new head-to-head elimination format to heighten the competitive drama. The new system also introduced an interesting strategic twist, as one could potentially be presenting three times if they advanced to the final round: Do you deliver your best material up front, or, conversely, do you save your best for last with no guarantee you’ll get a chance to use it?

By most accounts the formula was effective, though it was at times hard to accept the ruthless efficiency with which it discarded so many compelling would-be  pretenders to the Icon Gone throne.

One of the most unfortunate victims was Stephanie Sloan, who hoped to reveal the true story behind “the ‘G’ in GLC.” (Stephen Vogler won the inaugural Icon Gone with a conspiracy-theory-esque exposition arguing that the “G” stands for “gravity,” which it doesn’t.)

Stephanie delivered a solid, informative first-round presentation about the life and times of one Giuseppe Garibaldi, the nineteenth century revolutionary  credited with the creation of the modern state of Italy. Beyond his trans-Italian military campaigns, Giuseppe’s adventures took him to such exotic locales as Russia, Uruguay, Nicaragua, and New York, among others, making him a more-than-worthy namesake for so many prominent features and organizations in a region renowned for its globetrotters. 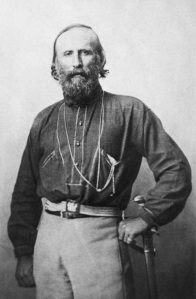 Giuseppe Garibaldi, Whistler’s only icon to have never come anywhere near the place.

At last count, Garibaldi’s name is attached to a massive volcano, a stunning alpine lake, a world-class provincial park, a hotel, a (now-abandoned) town,  an Olympic Development corporation, the company that founded Whistler Mountain, the renowned apres spot that hosted this years’ Icon Gone, and countless other local businesses. Not bad for a man that never visited the B.C. coast!

And so, with her five minutes almost up, Stephanie dangled this historical conundrum as bait for the judges’ and audience’s support, concluding with:  “If you vote me back for the next round, I will tell you how Mount Garibaldi got its name since the Iconic Garibaldi never came to this part of the world, and of Whistler’s own battles to be promote peace and freedom.”

Alas, Stephanie narrowly lost to Hi Brooks, whose ode to loved ones lost to the mountains left more than a few teary-eyed audience members, and we never got to find out. I’ve had a bunch of people write or tell me how they wished to hear the rest of Stephanie’s story, so here it is:

In 1860, the British sea captain George H. Richards of the HMS Plumper was conducting a survey of the coastline from the Fraser River Delta to the Sunshine Coast. When he encountered the massive volcanic peak at the head of Howe Sound, Richards decided that it was a fitting monument to the celebrated Italian hero, whose army had defeated the Kingdom of Naples a few months earlier, essentially creating the modern state of Italy. Garibaldi was an especially popular figure in Britain, considered a champion of Liberal democracy.

It was common practice in that era of colonial exploration to name far-flung landforms after prominent public figures back in metropolitan Europe. On the same trip Richards named a bunch of other geographic features, such as the Britannia Range of mountains along the east shore of Howe Sound, with Hanover, Windsor, and Brunswick mountains each named after a European house of nobles.

When, acting upon the advice of local mountaineers, the BC government created Garibaldi Provincial Park in the 1920s, it was an obvious decision to name the park after the mountain which was best known and most representative of the area (although there were a few calls to change the names to better reflect lobal history).

Mount Garibaldi and Garibaldi Lake from Panorama Ridge, probably the most photographed viewpoint in Garibaldi Provincial Park for the last 80-plus years.

Decades later, when a group of Vancouver businessmen started to act upon their dream of bringing the Winter Olympics to British Columbia, it made sense for them to name their organization, the Garibaldi Olympic Development Association, after the park where they planned to hold the games. They even looked into hosting the events in the Diamond Head area on the flanks of Mount Garibaldi itself, but, as we know, they eventually chose the peak known as London Mountain on government charts (again, named by an early British surveyor) but referred to locally as Whistler Mountain. 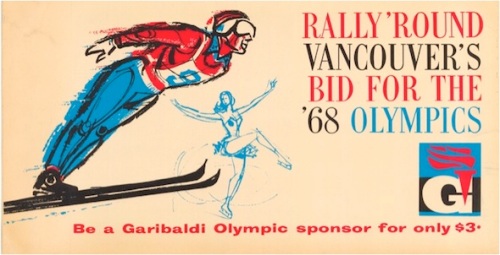 The Garibaldi Lift Company followed soon after, as GODA’s sister organization dedicated to the development of ski facilities at Whistler, and the current bar/lounge of the same name is an homage to that bygone era.

An early brochure for the upcoming development of skiing facilities on Whistler Mountain.

Beyond Giuseppe Garibaldi’s spirit of adventure, Stephanie drew a second parallel between the prolific place-name muse and our own history. When Whistler finally won the Olympic bid in 1998–a bid supported by a municipal council that Stephanie was proud to be a part of–it was seen by many as the culmination of a lifetime’s worth of efforts, akin to Garibaldi’s ultimate success 138 years earlier and half a world away.

Just as Garibaldi fought several Wars for Freedom during his lifetime, Stephanie planned on celebrating Whistler’s multiple bids to host the Winter Olympics, a movement which she describes as dedicated to ‘building a peaceful and better world’ through sport. As Stephanie’s presentation on this great, largely unknown icon would have concluded: “Garibaldi would be amazed to see all of the rights and freedoms we enjoy today.”

One response to “The Real “G” in GLC”