If the twin peaks of Whistler and Blackcomb Mountains put our town on the map, then Whistler Village is what keeps it there. It didn’t come together overnight; there were more than a few hiccups along the way, but to this day the village remains one of the defining features of our resort.

In the past we shared some stories from Eldon Beck, the lead architect responsible for the Village’s design. With this post we will delve a bit deeper into Beck’s creative process and the physical reality that it resulted in.

Despite the naturalistic approach, a lot of thought got crammed into Beck’s initial designs.

When asked about the main influences on his design, Beck first pointed to his success in redesigning the village at Vail, Colorado.

My professional training is in landscape architecture…  In 1972 my firm was hired by the town of Vail to do an overall community master plan… It finally turned into resolving horrendous issues they had about traffic and servicing in their village, so the task was to make it a pedestrian village. So I worked for them as their prime consultant for about six years, from 1972-1978. That really was the bulk of my early mountain planning experience.

It was on the heels of this successful transformation of Vail into a more pedestrian-centric place that Beck was solicited for the new Whistler Village. 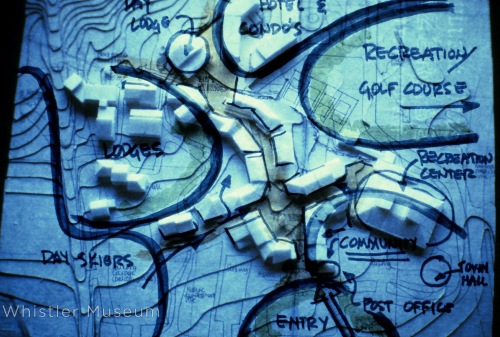 Lots of attention were paid to ambiance, the flow of traffic, and sight-lines of the surrounding mountains.

Unsurprisingly he took a similar approach here, to similar success, scrapping the original, grid-style design for his more flee-flowing traffic-free village. Continuing to describe how his work at Vail carried through to Whistler:

Vail did have a fairly important influence, mostly Bridge Street. The shape of the street actually was almost exactly what the shape of the valley suggested.

Going back further, Beck referred to where most influences in the ski world draw from, the Alps…

I’d done a fair amount of European traveling in the mountains, and I was fascinated by villages for a long, long, long time. So both Wengen and Interlaken [in Switzerland were major influences]. I took a lot of pictures there and I used parts of both of them. One as a pedestrian town and the other as a symbol of what a village was with the picture of shops on the ground floor and then the people who own the shops living above it. And so that was kind of the pattern, that’s the historic look of what a village is… The European villages all were shaped by the land. They didn’t violate the land. So to me that was very important. In our continent we tend to dominate the land. We don’t respect it as we should.

This amazing scale model was produced to help visualize and plan the village before building. Note the planned hockey arena that instead ended up being the Conference Centre.

The Village Stroll was intended to mimic the meandering curves of a flowing stream. Like an actual river, major bends in the route were conceived as eddies, incorporating open plazas where people could take a breather and watch the flow of traffic stream by.

The meanderings were intentional because, even though they weren’t direct or efficient like a grid, that wasn’t the point. Tourists weren’t here for business, Beck reasoned, but to relax, so a little happy confusion was sprinkled into the design. He wanted people to be able get a little lost in the village and wander aimlessly.

Practical considerations were not lost on Beck however; the village still needed to function. Logistical features such as the commercial loading bays, underground parking, hotel entrances and so on were tucked into back alleys in the Stroll’s many folds, hidden from view to keep the noise and distraction away from the pedestrian zones. 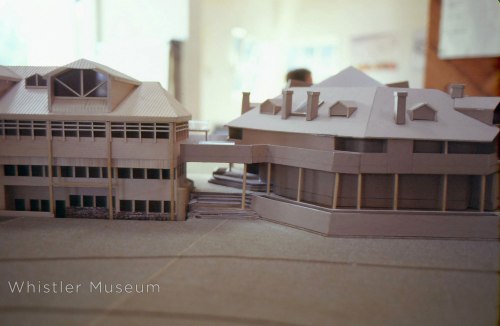 In next week’s post we’ll return to Beck and his reminiscences about the village’s construction and how the reality matched his vision.

One response to “Whistler Village Influences”