This Week in Photos: February 1

All of the photos used for This Week in Photos (as well as many more) can be found in the Whistler Question Collection here.

Just one of the winter safety signs visible along Highway 99. 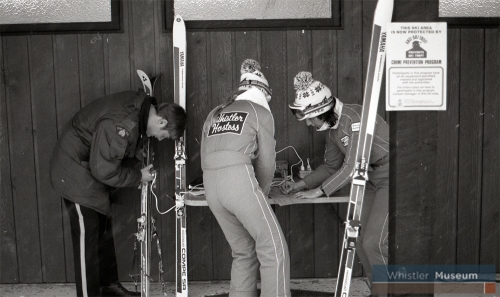 RCMP and Mountain Hostesses working at the “Ski Watch” programme during Tuesday’s snowstorm. The sign reads: THIS SKI AREA IS NOW PROTECTED BY ANTI-SKI THEFT CRIME PREVENTION PROGRAM Participants in this program have all ski equipment identified, marked and registered with the authorities. For information on how to participate in this program, contact manager of this ski area.

The Whistler Municipal broomball team exhibits the fine form that won it the Winterfest Broomball Trophy on Sunday. 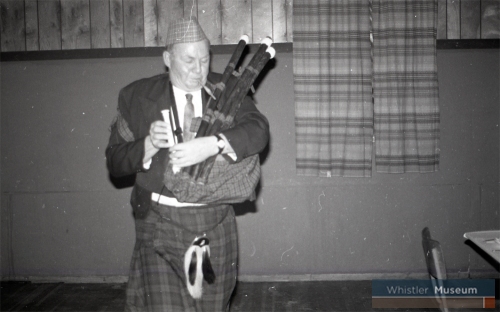 Elmer Hellevang plays the “pipes” as he leads the parade from the haggis at the Burns Night celebrations.

The Spring is Sprung (in January) – skiers sunning themselves on Thursday beside the Gondola Barn.

The Question didn’t just cover Whistler – here they are on the scene at Big White.

A ski-out to the parking lot, today underneath Blueshore Financial and the Village Stroll. 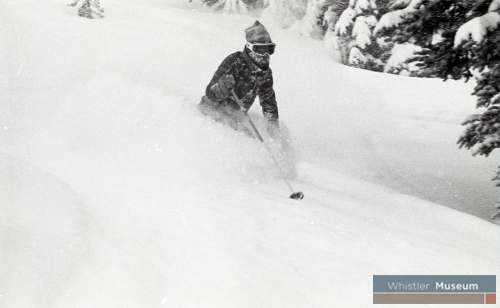 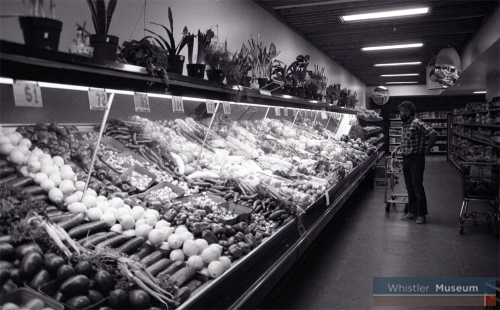 The fresh produce selection at the Whistler Grocery Store shortly after it was put out on display last week. Both the grocery store and Tapley’s Pub recently opened their doors.

Tapley’s Pub during its first week of operations.

Community Club members dig in to the numerous dishes at the Burns Night Pot Luck Dinner.

The brass plaque commemorating the opening of the North Side lifts will be displayed at the base of the Village Chair. 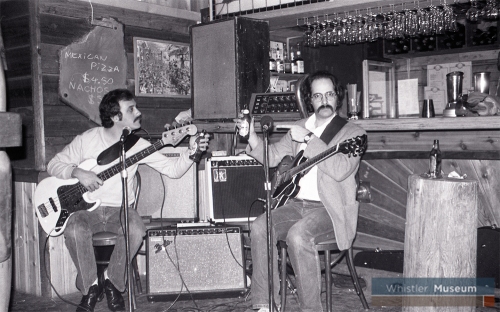 John Lavin and Gary Koliger know what they like – cold beer and good music. Lavin and Koliger were playing at the Creek House but will be sitting in with Doc Fingers at the Brass Rail for the rest of the week.

An Alta Vista residence under a heavy blanket of snow. 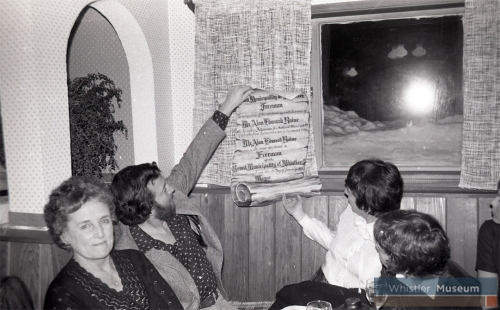 Four-year-old Justin Adams will be trying to beat the municipal sign bylaw by keeping on the move. Justin says he’ll use his earnings to buy a toboggan.

Like a bridge over troubled waters the Culliton Creek span begins to edge its way towards the south bank. Scheduled for completion this spring, the bridge will take a big kink out of Highway 99 when it is finished.

A competitor in the women’s 7.5 km cross-country race in the inter-collegiate competition held at Whistler January 28, 29 and 30.

CKVU talk show host Laurier LaPierre rolled into Whistler Friday, January 28 with his TV crew to compile an updated report on the crown corporation takeover at Whistler. At Beau’s Restaurant, LaPierre interviewed Roy Ferris, Mike Widger, Geoff Power and Glenda Bartosh for their opinions on Whistler and it’s future. The segment will be aired on the Vancouver Show Friday, February 4.

Fans turned out to PWA’s Pro Tour race Saturday and Sunday on Blackcomb to see Sean Murphy win his first race on the circuit.

Some fans even made their own banjo music at the race.

Education Minister Jack Heinrich explains a funding formula to his audience at Howe Sound School District offices in Squamish Monday night. They suggested he go easy on the chalk – there isn’t much money for that sort of thing, apparently.

Helicopters were used to airlift in tons of cement to re-stabilize Tower 12 after Thursday’s malfunction.