The Hills Were Alive… With the Sound of Music

In September 1988 an article written by Joanna MacDonald about a performance by the Vancouver Symphony Orchestra appeared in The Vancouver Sun.  This might not seem noteworthy or appear to have anything to do with Whistler’s history except that the concert written about took place 1850m above sea level on Blackcomb Mountain.

This was not a typical concert for the VSO, nor was it a typical year.  From January to July of 1988 the organization’s growing deficit had halted VSO performances.  In July, after creditors had forgiven the deficit and financial assistance was acquired by the symphony, the VSO began a series of outdoor concerts.  Their summer performances included concerts at Ambleside, English Bay and Granville Island, but none of these required transporting a $500,000 sound system, a 14-tonne stage and two tonnes of instruments up a mountain. 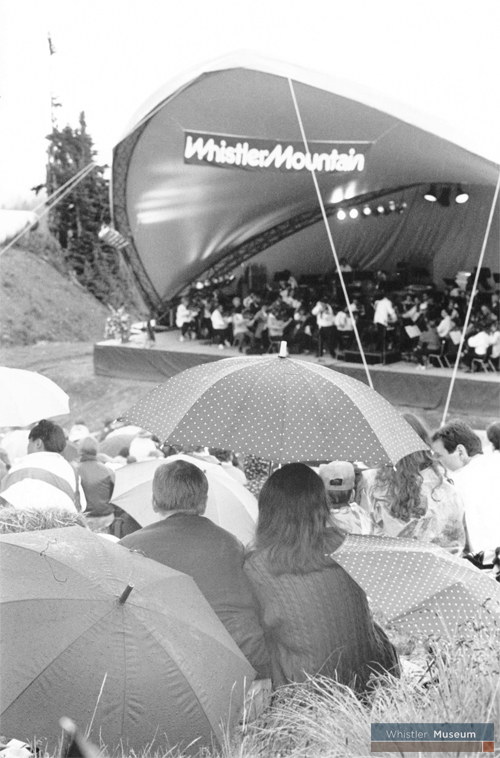 While the first performance on Blackcomb took place in the heat of summer, the VSO also played in the rain some years. Whistler Question Collection.

The weather made the stage on Blackcomb Mountain an interesting venue to perform on.  The VSO had though about the implications of wind and low temperatures, but didn’t expect 32 degree heat at the top of the mountain.  While the musicians were under cover and didn’t get too hot (despite wearing formal dress) audience members were encouraged to bring hats and sun screens.

Concertgoers on the mountain sat on hay spread around a 1.4-hectare site within an alpine meadow, a ver different arrangement than the Orpheum Theatre, the VSO’s usual venue.  According to Nancy Spooner, a VSO spokesman, “One family had the full red and white checkered tablecloth and a wine bucket with glasses.  There were families with grandparents and kids, and people were wearing everything from bathing suits to hiking gear.  Some people even brought up some mountain bikes and went riding before the concert.”  5,238 people were recorded as attending the performance. 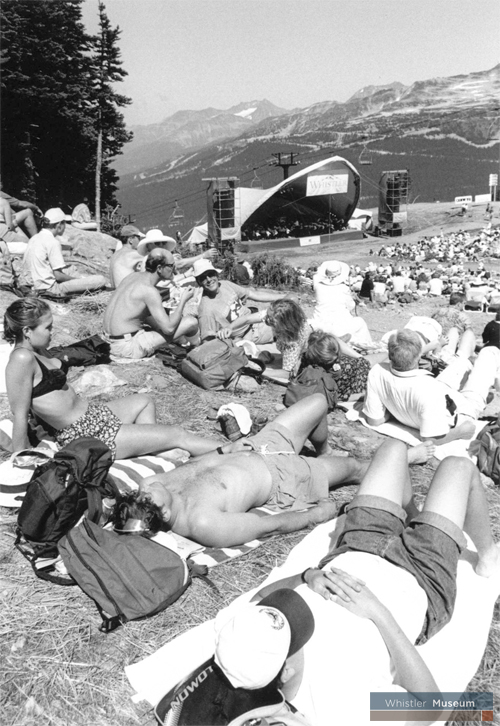 The VSO continued to perform annually on top of the mountain, first on Blackcomb Mountain and then switching to Whistler Mountain.  In 1998 their concert on Whistler was postponed as the mountain was closed for the summer due to the construction of the new Roundhouse Lodge.  This postponement lasted fourteen years.

In 2012, after an absence of over a decade, the VSO returned to perform in Whistler.  Instead of the top of a mountain, performances took place in Olympic Plaza over a weekend in late July.  In 2014 the VSO began performances on Canada Day and announced the creation of the Vancouver Symphony Orchestral Institute at Whistler, both of which have continued each summer. 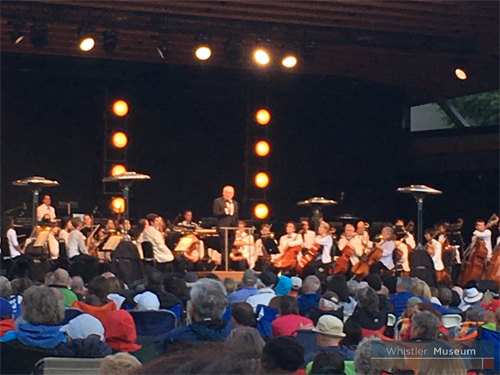 Unlike the first performance in 1988, today’s VSO performances in Whistler are not held in an alpine meadow and the audience does not pay to attend.  In other ways, however, the concerts are still very similar.  The VSO still attracts of crowd of thousands and a mix of visitors and residents.  Groups still bring picnics, families attend with kids and grandparents, people wear bathing suits and hiking gear, and quite a few people look like they just got off their bikes.