Historically, in the month of March, Whistler would be hosting a World Cup Downhill event.  Up to 500 weasel workers would be working 12-hour days preparing the racecourse, installing safety nets and removing and moving snow throughout the course.  These volunteers were as important to the success of the event as the downhill racers themselves.

Thousands of ski-race fans would descend on Whistler, filling up hotels and making reservations a necessity to eat at many of the world-class restaurants in Whistler Village.  Pubs and bars would be full to capacity and the village would be enshrouded in a party-like atmosphere for close to two weeks.

Whistler attempted to host its first World Cup race on March 7, 1979.  Due to weather, the race was cancelled.  Three years later, in 1982, Whistler successfully hosted the World Cup Downhill event.  This race took place on a course on the north side of Whistler and its finish was in the newly completed Whistler Village.

Peter Müller of Switzerland finished in first place and two Crazy Canucks, Steve Podborski and Dave Irwin, finished second and third, respectively.  The 1982 race was capped off with a huge celebration because Podborski tied Müller for the overall Downhill World Cup title. 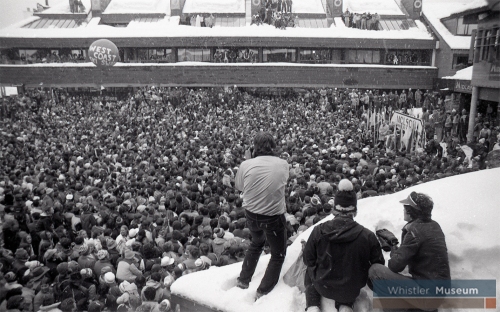 This would be the only race held on this course.  Racers complained the north side course was too flat and Müller even joked that he should bring his cross-country skis to the next one.  The downhill course was moved back to the south-side course and every other World Cup Downhill race held in Whistler was held on this course.  The racecourse was later renamed after Crazy Canuck Dave Murray, who succumbed to cancer in 1990.

Whistler hosted the World Cup Downhill event again in 1984 and two years later in 1986.  In 1989, Rob Boyd became the first Canadian to win a World Cup race on home soil.  If you ask many Whistlerites here at the time, they can tell you where they were when Boyd crossed the finish line. 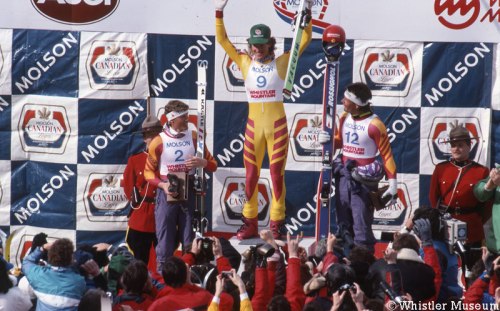 Prior to the Olympic Games hosted in 2010, the last successful Downhill Men’s event was held in 1995.

From 1996 to 1998, the FIS moved the North American stops to earlier in the race season, leading to three consecutive cancellations of the Whistler stop on the World Cup circuit due to snow and weather conditions.

Will Whistler host another World Cup Downhill race?  Or will it be an event that only appears in Whistler’s past?