Looking back on past summers (even ones that haven’t quite ended yet) it’s easy to remember the good parts: days at the lake, hiking around the valley and camping under clear skies.  At the museum we’re lucky to have the written records of various people’s memories of summers at Alta Lake, including one Douglas W. Barlow.

Douglas worked with the horses at Rainbow Lodge for the summer of 1930.  Though the lodge started as a fishing resort, horseback rides were a popular pastime for guests.  Douglas was in charge of the lodge’s 17 horses and the various trail rides throughout the week.  As he remembered, his charges kept him busy. 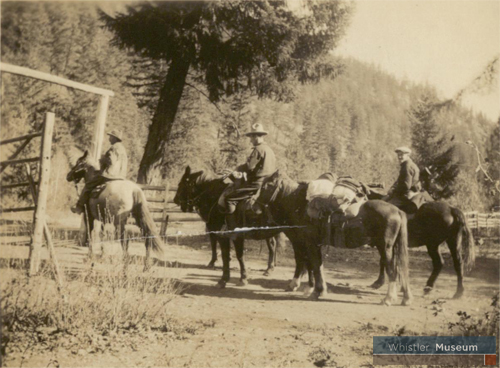 Heading out on the trail from Rainbow Lodge. Philip Collection.

Some morning guests could go on breakfast rides to the Green River.  Douglas would take a packhorse over the day before with all of the food and dishes for the early breakfast and guests would book their ride in the main lodge.  Douglas did not exaggerate when describing the trip as an early morning ride: the call time was 4 am.  By that time all the horses had to be saddled and ready to go and Douglas had the job of knocking on cabin doors to wake up the guests.  Not surprisingly, some guests would opt out.  When that happened Douglas would unsaddle the horses and send them back to roll around in the dirt of the stables, only to have a guest change their mind and run up at the last minute.

On the other end of the spectrum from breakfast rides, Douglas led midnight rides as well.  he described these rides as “where you took a group out on the trail, built a campfire, toasted marshmallows, played the guitar and sang.” 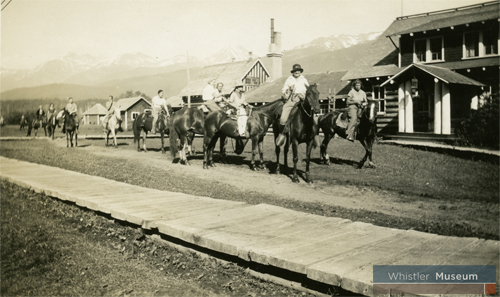 While Douglas Barlow led each ride that summer, sometimes Myrtle, or even Alex, would join in the fun. Philip Collection.

Not all of the rides went smoothly.  By the end of the summer, when many of the guests were getting more comfortable on horseback, a group headed down to a long sandbar on the river where they could race.  One horse got spooked, jumped to the side and threw its rider into the path of the other horses.  Luckily, the girl’s glasses were broken but she was left uninjured though pretty shaken.

As Douglas recalled, these were “good days at Rainbow.”  When not riding, he had time to hike up the surrounding mountains and “play in the snow” and some nights he and a group of others would take a boat out with a gramophone, cushions and pie and milk from the kitchen. 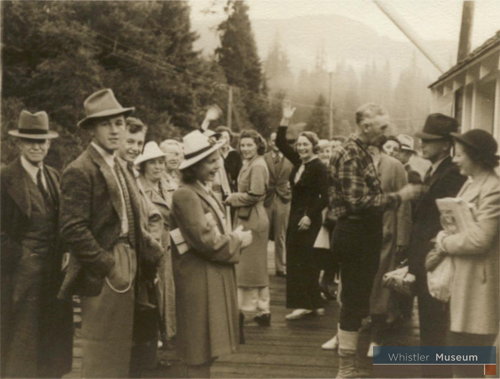 The Rainbow Lodge station could be a bustling place when a train came in, especially the Sunday excursion train. Philip Collection.

The busiest days were Sundays, when the railway ran an excursion train up to Rainbow.  Trainloads of visitors from Vancouver would descend on Rainbow Lodge for about two and a half hours where staff would serve afternoon tea, cake, sandwiches and ice cream.  Those who were inclined could be taken on short rowboat rides on the lake.  With all this going on it’s no surprise the horses were not taken out on Sundays.

Douglas only worked at Rainbow Lodge for the one summer.  He then worked in the forestry service in the province but every time he was on a train that stopped at Rainbow he would get off for a minute to look for the Philips on the platform.

One response to “Riding at Rainbow”