The community of Whistler has undergone many changes in the last hundred or so years, and nowhere is this more evident than in our elementary schools.

When the first non-indigenous settlers began to make their homes around Alta Lake in the early twentieth century, there was no school- no infrastructure at all, in fact. The first school was built in 1931 as a community effort. Over $300 was raised from the small collection of residents- impressive at a time when a litre of milk cost ten cents! The Alta Lake School was fairly bare-bones.  It was warmed by an iron stove and had a nearby creek as a water source and gas lamps for light.

Ten students had to attend in order for the school to be funded by the government.  Only nine were then available at the time, so one boy, Jack Jardine, was persuaded to come for a half-day every week. Teachers today dream of small class sizes but this lack of students became the Alta Lake School’s curse. The school would close in 1946, reopen in 1951, close in 1962, reopen in 1964 and close for good in 1970 as families moved in and out and the number of children fluctuated. One teacher, Mel Carrico, was even hired on the condition that his four children attend the school.

As the permanent population grew following the opening of Whistler Mountain, the school was able to stop it’s constant reopening and closing. In 1976 a new school named Myrtle Philip School was built at today’s location of the Delta Village Suites. Though it opened with only 57 students, the students soon began to outgrow the school and an addition and then eight portables were added.  In 1992 the students were moved to the new Myrtle Philip Community School at its current location on Lorimer Road. 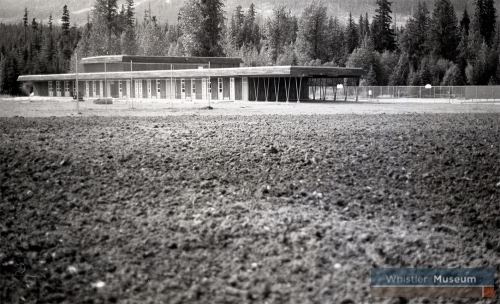 The first Myrtle Philip School at the beginning of the school year, 1978. Photo: Whistler Question Collection.

Whistler was now faced with a constantly growing student population. In 1999, Myrtle Philip had 10 portables, housing half the school’s population. Anyone who’s had class in a portable can tell you that while fine on paper, they’re not ideal – they’re small, are often too hot or too cold, and have no water supply (especially noticeable when walking out to the washroom in a blizzard). Grade 7s  had been moved to Whistler Secondary when it opened in 1996 and soon the high school was in need of portables too. It was decided that a second elementary school was needed, and in 2001 the Howe Sound School Board began to draw boundaries for catchments of the two schools.

This resulted in some conflict – the new school needed half the youth of Whistler to attend, but not everyone lived with easy access to Spring Creek and there were worries about longer commutes and more cars on the road. Boundaries were eventually decided on and building could commence.

This wasn’t as simple as it sounded. The school was initially slated to open September 2001, but this was pushed back multiple times- first to September 2002,  then January 2003, then again to November 2003, then finally January 2004, as funding was secured and construction completed.

The wait was worth it. The new school boasted new science and art rooms, a computer lab, a well-stocked library, and, after a few years, a French Immersion program.

Finding ten children to attend school in Whistler is no longer a problem. Whistler’s students now attend four elementary schools – Myrtle Philip, Spring Creek, École la passerelle and the Whistler Waldorf School. Even now discussions are beginning again about the possibility of a new school as Spring Creek. From the days of one-room schoolhouses to multiple school buildings, education in Whistler has certainly changed, though it remans an important part of community life.

2 responses to “School Days in Whistler”