From Whistler to California: An Archival Mystery Solved

Working at a museum or archive can be a bit like being a detective.  Piecing together evidence to solve historical puzzles, you often uncover connections between people and places you’d never expect.  I’ve learned this well in my first two and a half months as Archival Assistant at the Whistler Museum and Archives.

One of the first collections I looked at in my new role was a donation of nearly 500 photographic slides from longtime Whistler resident Karen Blaylock.  Most of them provided a wonderful glimpse of the area in the late 1960s and 1970s.  Some of the photos, however, were taken well outside the valley.  As these slides don’t fit within our collections policy, they had to find new homes.

This was the case with about 70 slides depicting a very un-Whistler-ish scene: a theme park with orca whale shows, hoop-jumping tigers, elephant rides and more.  These were most likely from a family vacation to California.  But where exactly were they taken, and who should they be donated to? 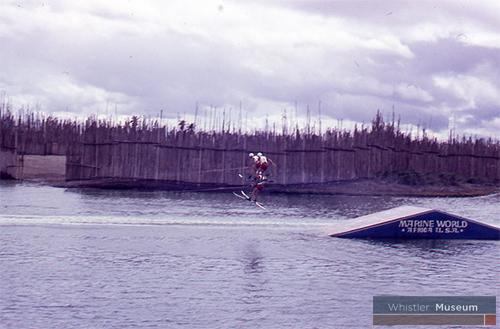 This picture provided the clue needed to identify this California theme park. Courtesy of the San Mateo County Historical Association.

The answer came – as it usually does in these archival mysteries – in a well-hidden clue.  On closer examination, I noticed that one of the slides showed a water skiing jump with the words “Marine World/Africa, U.S.A.” on its side.  A quick Google search revealed that there was once a tourist attraction by this name in Redwood City, San Mateo County, California.  Bingo!

With a bit of further research, I found out that this park had a colourful past rivaling Whistler’s in its heyday.  Marine World opened in 1968 as a small zoo/aquarium on land reclaimed from San Francisco Bay.  It went bankrupt after only four years, but was purchased by Resorts International, owner of an animal-training facility known as Africa U.S.A.  It soon reopened under a joint name and the park wowed residents and guests of Silicon Valley throughout the 1970s and early 1980s.  Draws included water-skiing elephants, rock concerts, safari raft rides, a fake mountain with 50-foot-tall water slides, a dolphin named Mr. Spock and a one-horned goat marketed as a ‘unicorn’.  Possibly the craziest stunt took place after the park’s move to Vallejo in 1986 – Star Trek actor William Shatner rode a killer whale to raise money for wildlife conservation.  The relocated Marine World/Africa U.S.A. eventually became today’s Six Flags Discovery Kingdom.

Now that I knew where the slides were from, I could search for a museum that might want them.  This turned out to be the San Mateo County Historical Association (take a look here).  I contacted the Archival Collections Specialist and emailed her scans of the slides.  They were unanimously accepted at the Historical Association’s monthly collections committee meeting.

At the time of writing this article, the slides have completed their nearly 2,750 km journey from Whistler to California.

I’m very grateful to have had the opportunity to connect this little piece of history with its wider context and I can’t wait to see what other discoveries await me at the Whistler Museum and Archives!

Holly Peterson is the Archival Assistant at the Whistler Museum and Archives.  She is here on a Young Canada Works contract after completing the Museum Management and Curatorship program at Fleming College (Peterborough, Ontario).

For more accounts of Marine World/Africa U.S.A. in its heyday, take a look here, here or here!

3 responses to “From Whistler to California: An Archival Mystery Solved”