The Holiday Season in Whistler

The holiday season has always been a hectic time in Whistler, as so much energy is spent welcoming and entertaining guests.  The Village Stroll looks magical at this time of year, with the lights glowing on the trees and the snow falling through the air.

Scanning through our archives, photos from many collections show that Christmas has been a major production in the area dating back to Rainbow Lodge in the 1920s.  Alex and Myrtle Philip, the owners and proprietors of Rainbow Lodge, were renowned hosts and pulled out all the stops at Christmas to entertain visitors and residents around Alta Lake.

While we have only a few photos of the interior of Rainbow Lodge during this era, the Philip Collection includes images of the main lodge with a decorated tree and streamers and the dining room set for Christmas dinner.

Other holiday photos from Alta Lake include the Woods family in the snow with party hats and a New Year’s Eve dance at the community hall (also the Alta Lake School) in 1937. 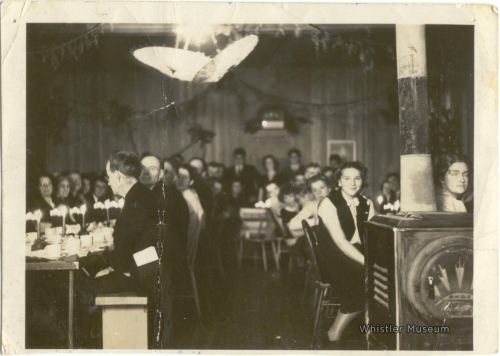 Dances at the community hall were remembered fondly by Bob Williamson, a lineman working for the Pacific Great Eastern Railway in the 1930s.  As he recalled, “This was the Hungry Thirties.  Not very many locals were earning much money but many pleasant evenings were spent in this hall in the wintertime… The only cost for the evening was to buy the coffee and that was raised by donations of 10 to 25 cents from those who could afford it.  Alex Philip made the coffee in Granitewood Gallon Coffee pots.  It was excellent coffee.” 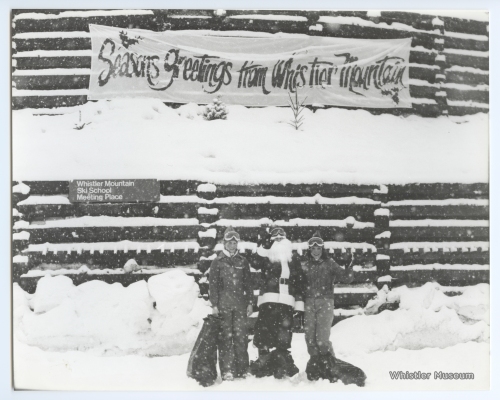 As skiing developed in the valley, winter and the holiday season got busier.  The Whistler Mountain Ski Corporation Collection includes photos of a skiing Santa, ski instructors dressed up as reindeer and Seasons Greetings from Whistler Mountain.

The so-called “ski bums” got into the holiday spirit as well.  Over the past few months Angelus Chouinard has been working on digitizing the complete George Benjamin Collection and we have found some gems showing Christmas dinner being prepared at the first infamous Toad Hall in 1969. 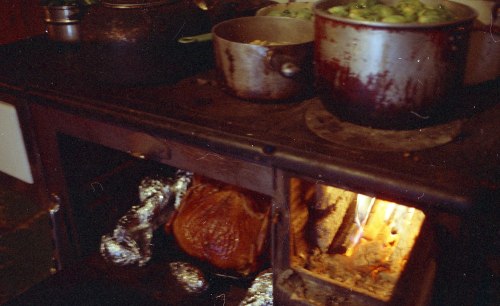 Christmas at Toad Hall was great… Of course, there was no electricity, so it was just Coleman lanterns and the old ‘Master Climax’ wood stove.  One year we used candles to decorate the Christmas tree.  We only had birthday candles so they burned quick and we had to keep replacing them.  While they were burning it looked amazing, but we were terrified of burning the whole place down.

Many such treasures have been found while digitizing the George Benjamin Collection.  George Benjamin first came to Whistler to ski in 1968 and moved to the area in 1970.  He and John Hetherington co-owned Tokum Corners, a roughly made cabin with no electricity or running water, and lived there with Rod MacLeod into the early 1980s.  George was a semi-professional photographer and, as his family in Ontario owned a photo-finishing business, was able to develop his photographs for free.  There are over 8000 images included in the George Benjamin Collection, spanning from his first visit in 1968 to 1991.

To view more of the photos mentioned here, check out our Smugmug page here and keep an eye out for more photos from the George Benjamin Collection to be added in the New Year!

We hope everyone enjoys their holiday season and wish all of you a Happy New Year!