Getting Fit (& Fun) at Myrtle Philip

Opportunities for continued learning and recreational programming are not always abundant in small communities.  This was especially true before the internet made distance learning and online tutorials commonplace.  In the 1970s and 80s in Whistler, Myrtle Philip Elementary School was the site of learning for more than just school aged kids.

An adult education department began running out of Myrtle Philip School after the school opened in 1976.  It offered various classes and programs, mainly in the evenings, to those living in the area.  Looking at the summer programs offered in 1981, it would seem that there was high demand among the local population for sports and fitness related programming.

That summer, seven different activities were offered out of the school, including gardening, French lessons, basketball, tennis, and karate once or twice a week.  The most popular and frequent classes were named Fun & Fit and Superfit, occurring a total of seven time weekly, almost enough to fulfill the small community’s “seemingly insatiable need for fitness classes.”

The classes were run by instructors Sue Worden and Susie Mortensen, who began the program in the fall of 1980.  According to the Squamish Citizen, the popularity of the program was “overwhelming” and it was regularly attended by at least thirty to forty people, including a core group of five to ten men.  By adding later time slots, the class hoped to increase those numbers even further.  Debbie Cook, the adult education coordinator, attributed the program’s success to its instructors and “the enthusiasm and dedication they have infused into the participants.”

For $2 (or $10 for ten sessions) participants could engage in an hour-long exercise class including stretches, aerobics, and strengthening exercises.  In 1982 Sue Cameron wrote a review of the program for the Citizen, describing it as a great opportunity to get in shape for the ski season.  According to Cameron, the class began with fifteen minutes of stretching and warming up before turning to twenty minutes of “sweat-out time, running and hopping on the spot intermingled with subtle stretching exercises.”  Pushups and sit ups were followed by another period of stretching, this time concentrating on breathing “so as to get the most out of the pain you just went through.”  All of this was, of course, set to modern music of the 1980s.

Classes were offered daily Monday through Friday, meaning that “if you can walk the next day you can do it again!” 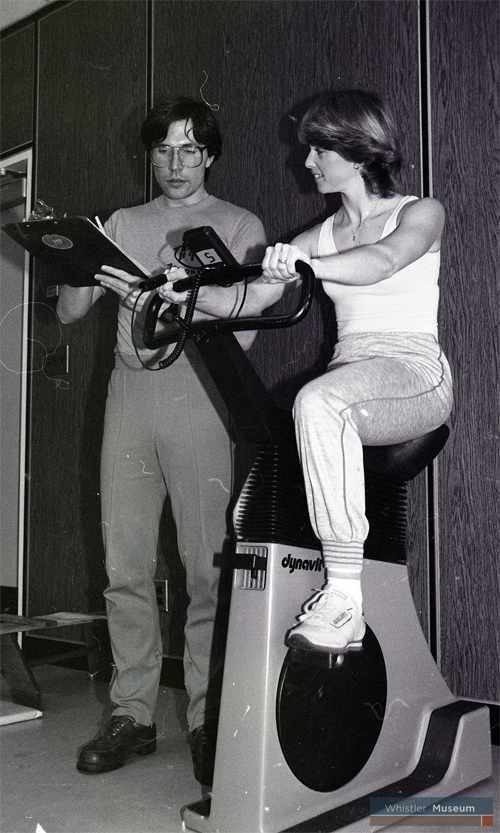 The demand for fitness programs was not just for the adults 0f Whistler.  Kindergym, a weekly class of basic gym activities and occasional handicrafts sponsored by the Alta Lake Community Club, also ran out of the Myrtle Philip School gymnasium.  Targeting children aged two to five, the class was also an opportunity for parents and caregivers to socialize.

The offerings of the adult education department expanded over the decade.  Instructors were drawn from within the community, calling on anyone who wanted to share a particular skill or hobby.  During the fall of 1986 community members could learn about European cooking from Mark Kogler, first aid from Karen Killaly, and mountain safety and avalanches from Chris Stetham and Roger McCarthy, as well as various crafts such as macrame, glass etching, and dried flower arranging.  Topping the list of programs was still Fun & Fit with Sue Worden.

Whistler has grown quite a bit since the 1980s and today there are numerous classes and programs, some still running out of (the slightly newer) Myrtle Philip School.

One response to “Getting Fit (& Fun) at Myrtle Philip”